An Evening with Lee Child 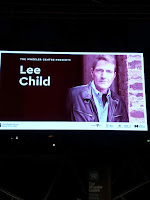 By my estimate, Lee Child has probably done several hundred writer's events and interviews, and in fact he'd just completed a writer-in-conversation event in this venue no more than half an hour ago, yet he sat, relaxed and engaged, ready to talk. I was expecting to hear something rote, something that sounded like he'd said it a million times before - I spent 8 years doing radio interviews with writers and I've learned to pick that tone. But Lee Child managed to make it sound fresh and interesting. He also talked as if Jack Reacher was a real person, not just a character. Before I knew it, I had my notebook out, writing things down.

Firstly he talked about the idea of Reacher as a mythical archetype - the silent stranger who rides in off the plains (like in a Zane Grey novel), finding women and children alone and helping to save them. In a similar way to the hero who rides out of the forest and saves everyone - think Beowulf or Odysseus - the knight errant, the wanderer. Of course the saving hero has to leave afterwards and remain mysterious and mythical, and often he lives nowhere 'realistic'. Reacher is fundamentally of myth and legend, in a contemporary world where myth and legend has been ruined.

Child was very aware right from the start that the Reacher books needed a distinctive voice, and really worked to create this - someone who is articulate but unaccustomed to doing much talking. He also said he thought a book is a crude version of an audio recording, so the voice on the page is very important. He thinks about the rhythm of his sentences all the time, so the reader is pushed through the book by the way the sentences work. He does read what he's written aloud.

He doesn't do research, but he talked about having been to all the places that are his settings, and how much he loves trivia and stores little things away. It seemed to me that he has a prodigious memory for details and can draw them out and use them. He never plots or outlines - he starts at Sentence 1 and writes Sentence 2 and just keeps going. He often worries about whether the book will be long enough, and that awareness of length stays with him all the way through. The story unfolds organically - he talked about 'living' the story as it happens and writing it (and he doesn't do revisions or revise with the editors because 'that's how it happened').

He did talk about character arcs, but said he thought it was fatal for an author to fall in love with their character (and mentioned Dorothy Sayers falling in love with Peter Wimsey and the series falling apart). You have to maintain critical distance from your character and stay honest about them. If a character 'takes over' it means the author is not working hard enough. He banishes Reacher from his thoughts when he's not writing a book about him. 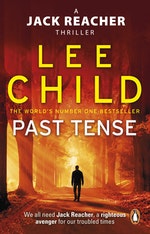 There was some discussion of Reacher's love life - women leave Reacher, not the other way around. An intelligent woman soon works out Reacher is not a good prospect! Child always gets asked about Tom Cruise playing Reacher. He said he loved working with Tom and he is very hardworking and intelligent about how stories work - but Child underestimated how upset people would be that Tom was cast as Reacher in the movies. However, Child had a veto clause and after two movies he was able to say - no more movies. There was mention of a TV series but I'm not sure how serious that was!

There were a few audience questions - one was about guns. Child said: Reacher says never tell a soldier that guns are fun. Anyone who gets excited by handling a gun is the person who shouldn't have one. Another question was about Reacher's age, and Child said Reacher was 36 in the first book, and probably now he is about 52, so he's slowed down the aging (not one book/one year of aging) and there may be more prequels, going back in Reacher's life. 23 books so far and no sign he's stopping writing them.
And two of Child's favourite writers? John MacDonald's Travis MGee books and Dick Francis.
It was interesting to see how many men were in the audience - probably about 50% - but lots of female fans, too! It was a great session and I went home with lots to think about. 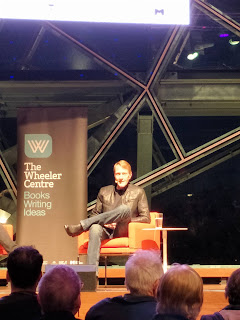