My Hamline friend, Debra McArthur, invited me to Blog Hop, so here are my answers.

What are you working on now?

Right now, I'm back writing poems for my verse novel, The Dangerous Kind. After writing a critical thesis last year (for my Hamline MFA) on verse novels, I started to see all the different ways you can write a verse novel, and how adventurous you can be, thanks to reading writers such as Helen Frost and Allan Wolf. I'm being quite experimental - for me - although others might not think so. It's challenging and great fun when I get a poem to work. I'm also writing short personal essays for a blog I haven't opened up for reading yet.

How does it differ from other works in the genre?

I'm not sure the verse novel differs a lot from what Frost does, but it's certainly different from a lot of other verse novels I've read. I dislike vns that are basically truncated prose, and so this almost goes to the other extreme, with form poems and lots of different voices.
The voices are very important to me, as is finding ways to show them through language and line breaks.

Why do you write what you do?

Once I get an idea that really excites me, I can't let it go. Sometimes I think it would be so nice to write the same kind of book all the time and know publishers and readers will be avidly waiting for the next one, but I just can't do it. I have to go where the idea leads me, whether it's into a historical novel, a verse novel or a picture book.
It's that excitement that keeps me going, too. A novel can take a really long time to write, and then there are the rewrites. If I'm not still committed to the story and characters after all that, the revisions are painful and not productive.

What's the hardest part about writing?

For me, it's the revisions. I love the first draft, but I've had to learn to love revision, too, and see what it can add to a book. Mostly, it's about deepening the characters and plot. I have to remind myself that the first draft was just for me, and now I have to work out what the reader wants, and what is still in my head and not yet on the page.
This is where a good reader or workshop group is so valuable (thanks, Big Fish!). When you have a group who will read chapter after chapter for you, and make good comments, it really helps you to see what is missing. I tend to be a bare bones writer, and then have to fill in the "meat" on second and third drafts, and also learn to cut the stuff the reader doesn't need.

At this time of year, anyone who writes and also has a job (to pay the bills) is hanging out for the December-January break, because that's the time when you can read and get fully back into writing. That's if you don't have a million family commitments. If you teach, this also tends to be the one time of the year when you can stop filling your head with other people's writing and focus on your own.

BUT. It's not that easy. Nine months of other people's writing has done more than fill your head and sap your energy. It has, in the words of a Hamline faculty member, Jane Resh Thomas, drained the well. Like many writers who teach, Jane has experienced what it means to have a well of creativity that gradually runs dry. After all, you're not doing your teaching job very well if you hold everything at a distance and treat grading and feedback like a multi-choice performance review. But when you put your passion into teaching and other people's writing, you pay.

I'm not complaining about teaching writing. I love it, and always have. So do the other writing teachers I know. But we also know that when it comes to the well, by December it's pretty well at rock bottom. Just a few inches of dry dust down there ...

So how do you re-fill the well? Here are some ideas:


I haven't been teaching this year but I have been studying and writing full-time, and my well is a bit dusty, too, from finishing two completely different novels. I need some time-out before I start the next one, so I've been doing the one other thing that makes me feel creative and industrious again (goodness only knows why!). I've been spring cleaning my office! Apart from creating large piles of rubbish for the bin, I've also been finding poems and stories that are ready for another draft, notebooks and random pages of ideas, and more books that I'd put away to read later. I'm starting to feel re-inspired already.
Posted by Sherryl at Wednesday, December 11, 2013 0 comments

It's always good to have extra recommendations for gifts at this time of year, and books are the best of all! I try to buy every child in our family at least one book, and sneak books into other people's parcels, too. And of course if someone asks me what I'd like, I have a handy list of half a dozen titles to give them. 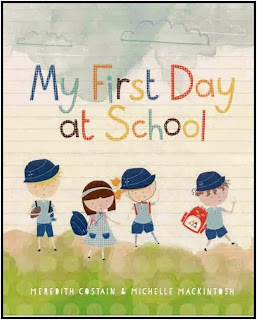 If you have someone who's about to start school next year, you can't go wrong giving them My First Day at School by Meredith Costain. Ari, Amira, Zoe and Zach experience their very first day, with all the trials and tribulations, as well as the fun. First day can be scary (I can still remember the disgust I felt at being made to take a nap after lunch!). The story delves into reading, drawing, pasting, eating and whether they'll make it to the toilet in time. (Ah, it's all coming back to you now, isn't it?) The illustrations are very cute and little kids will love all the faces and actions.

I think the best YA novel I've read this year would be a dead heat between Eleanor and Park by Rainbow Rowell and Out of the Easy by Ruta Sepetys. I'd heard a lot about Eleanor and Park and it lived up to the goss. A novel that startles and enlightens at the same time, and totally engaging and interesting characters. One of my good Hamline friends lent me Out of the Easy (sorry, I still have it!), which I would never have come across otherwise here in Australia. It's set in 1950, in the French Quarter of New Orleans where Josie works in a bookstore and struggles with having a mother who is a brothel prostitute. Lots of atmosphere, danger, secrets and hope.

I've read lots of crime fiction (probably more than I should!) but I think my No. 1 spot has to go to Michael Robotham's Watching You. Joe O'Loughlin is a clinical psychologist who gets involved with Marnie, a woman who is convinced someone is watching her. Meanwhile, she's also trying to deal with a husband who has been missing for over a year. There are plot twists in every chapter and the book was impossible to put down. Also on my list for "goodies" was Peter James's latest, Dead Man's Time and Just One Evil Act by Elizabeth George.

Finally, since I was just about the only person in the world who didn't like Gone Girl by Gillian Flynn, I approached my review copy of The Next Time You See Me by Holly Goddard Jones with wariness (because it spruiked Gone Girl on the cover). There are quite a few characters in this novel but they're easy to remember because they are all so different and well-portrayed. There's a body in the gully that seems to move around, and people who may or may not be missing - in other words, lots to keep you guessing without being tricksy. The creepiest character for me was thirteen year old Emily - the kind of kid you'd expect to find in a Stephen King novel! 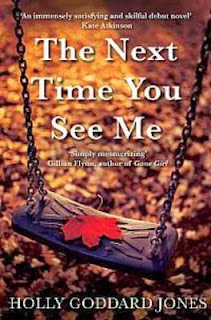 Where do you get your ideas from?


It’s a question I get asked over and over (as many writers do, I’m sure), and I was asked again recently.  “How do you get your ideas?” There’s actually no easy answer, but I always remember something I was told years ago – “Ideas don’t usually come knocking on your door. You have to go out there and hunt them down.”
There are quite a few myths about ideas. One is that there is a limited number and if you get a good one, you have to hang onto it and make it work. I see lots of people in my classes who cling doggedly to what they think is their one and only idea and work it to death, and then wonder what happened.

Another is that a really good idea can’t possibly come from a writing exercise. Some writers regard that as a kind of cheating, as if the idea somehow belongs to the person who gave them the writing exercise. Some of my best poems and stories have come from exercises. Then there’s the myth that a great idea will come in a huge flash like a revelation, so all those other ideas you might have are not as “worthy”.

It’s true that writers do get amazing ideas in an inspired moment, but those moments are few and far between, especially if that’s all you are doing – waiting for it to happen. It’s far more likely that the brilliant idea will come because you have been working on ideas all along, and coming up with lots, and then something clicks (because the brain is a wonderful, mysterious thing) and bang! You have a great idea!

I think the trick to coming up with good ideas is a combination of things. The key element is practice. I’ve just done Picture Book Idea Month for the first time and, I have to admit, I quailed a little at the challenge. One picture book idea every day for 30 days? But as with Nanowrimo, you have to put aside all notions of judgment and go with it. I found that the more ideas I wrote down, the more I came up with.

That’s another myth – that you will run out of ideas if you do something like this. I have found that the more you “hunt down” ideas, the more your brain will work to help you come up with them. It’s as if you’re engaging your ideas gear, but being non-judgmental is important. If you are prone to dismissing ideas with a “oh, that’s just stupid” before you even get them onto the page, you will certainly stifle yourself.

Some things that have helped me over the years with ideas (and these are the tips I give kids when I do school talks, as well as adults in my classes) include:


What works for you?