I can’t say I love deadlines. There’s a famous quote about loving the sound of deadlines as they fly past! But if they do nothing else, deadlines draw a line in the sand, one that your conscious and unconscious brains recognize. By this date, or else. Or else you get fired. Or else you lose marks. Or else you never get work from that company again. Or else your editor has conniptions and starts talking to you in a very strained tone.

We all know what a deadline means. It’s how you approach a deadline, how you think about, or feel about it, that makes the difference. If you’re like me, you plan ahead, you get started early, you probably finish the work before the due date and that gives you time to revise one more time. Why am I like that? Not because I’m super-writer. Because I’ve never been able to pull an all-nighter to get something in. Never. I love my sleep too much, and I can’t function without it. Just the idea of having to stay up all night to complete something on time makes my brain feel fuzzy.

I’ve had to accept that some people thrive on this kind of work method (or think they do). They wait until the last minute and then throw themselves into the work, totally energized and working at the top of their game. Not. I actually don’t believe it. I believe that they can stay up all night, that they can work really hard and get some good stuff done. I guess what I don’t believe is that it’s their best work. If they’d started earlier and given themselves more time to rework and revise, surely then what they produced would have been even better?

Maybe that doesn’t count anymore. Maybe it’s ‘pretty good’ work that gets the job done is all people want. I don’t know … I love the euphoria of the first draft as much as anyone. But I also love the feeling of growing, building, developing, stretching, imagining more – all the things that happen when you have plenty of time.

So is a deadline only about motivation + discipline? Can it also be about allowing time to stretch? A good deadline gives you dreaming time when you use it well. It can help you establish a routine of a little every day, which keeps the project in your head where your brain can quietly keep working on it for you, even when you’re off doing something else. Yes, it’s not that I love a deadline as it swishes past me. It’s that I love a deadline as it waits patiently under those trees in the distance while I meander along, picking flowers, day dreaming, doing a little work at a nice pace, but edging ever closer to meeting it. 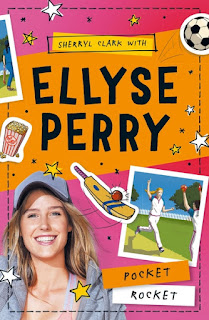 PS Last year I had four deadlines to write the Ellyse Perry series. I spent more time on Book 1 than the others because I was also setting up the series concepts, four plotlines and introducing all the stuff that has to be in the first book. But it was worth it. "Pocket Rocket" has just been named a CBCA Notable!
Posted by Sherryl at Monday, March 06, 2017 0 comments