I've missed posting this month because I've been writing - around 30,000 words of a new SF novel for my Hamline creative thesis, plus a new project for Penguin. But now I'm taking a little time out to celebrate the release of my new verse novel, Runaways. 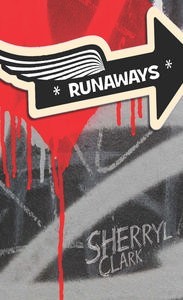 Jack and Cassie are brother and sister, and when Dad turns up and takes Jack away "on holiday", Cassie is not convinced. But Jack is a difficult kid and Mum doesn't seem bothered that he's gone.
But Jack is a long way away, with a dad who gets a better offer, so Jack takes to the road. He knows where he's going - he's following a story Cassie used to tell him. But is she brave enough to join him?
And can you ever really run away? Or does it just make things worse?
Here's an excerpt:

that’s what happens
when you’re younger

Jack gets more from Dad
in a day
than Mum gives him
in a year
but it’s totally suss
I know it is
but I stay silent.

out on the highway
trees and trucks whiz past
zzzooom!          zzzooom!

and I can’t say anything
because Dad’s hands
are really tight on the wheel
like Mum’s.

‘hurry up,’ he says
while I freak out
behind a bush

it’s scary
the dark
wants to suck me in
like a black hole.

*
I ask Dad where we’re going
‘you said the beach’

I ask again
where we’re going
‘what about school?’

I ask again
‘where are we going?’

I get a whack that
makes my ears ring.

Are you unhappy with your agent?


I’ve been thinking about this as the result of several comments by different people in the past few days – some on blogs and some in person – and wondering why. After all, getting an agent, we’re told, is the key to being published and successful these days. (If you disagree, great, but that’s not what this is about.) In the US, the standard perception is that if you don’t have an agent, particularly in the area of adult fiction, you have very little hope of getting your book in front of an editor.

How to get an agent is the focus of many articles. I even wrote one myself after interviewing two agents at a conference. A lot of agents, such as Janet Reid and Kristin Nelson, have blogs where they give a truckload of advice on how to be professional and get an agent, and what an agent will do for you. But lots of writers are saying, behind closed doors where no one can hear them (or out loud when they want to complain to the world), that they are unhappy with their agent.

And all the writers who don’t have an agent yet wish they’d be grateful they’ve got one at all and shut up.

Why the complaints? I suspect it’s for one of the following reasons:

·       *   The agent was new or starting out when they signed on, and now the agent is really busy and doesn’t have the same amount of time to spend on each writer anymore. Or that early enthusiasm and determination the agent had has been worn away by the ups and downs of the traditional publishing world.

·      *   The writer thought they’d be getting a combined cheer squad/friend/supporter/partner and their agent believes it’s a business and the writer needs to find that stuff elsewhere.

·   *      The writer thought their agent, who genuinely loved their book, would sell it in a flash for big dollars, and the agent either hasn’t been able to sell it to anyone, or for a much lower advance than hoped for.

·   *      The writer didn’t get any of the “dream” agents he/she was hoping for, but they got this agent (who was better than no agent, right?), and now they’re thinking it was a bad move. Why? For any or all of the reasons above. Most agents only take on books and writers whose work they love, but sometimes it doesn’t happen the way either of them hoped.

· *        The writer didn’t really investigate well enough how this agent operates. Some agents work on your manuscript with you (often they’ve been editors before), some expect you to give them perfection, more or less, that they can sell. Some agents see it completely as a business, and you make appointments like everyone else if you want to talk, and some agents are much more about career-building with some hand-holding added in. The spectrum of how an agent likes to work with clients is vast. Writers need to know this stuff.

Over the years, I’ve realized that many writers have no real idea of what agents do, or are supposed to do, for the percentage they earn. They also don’t know or accept that a bad agent, or an agent unsuited to the relationship they want or need, is worse than no agent at all. Once you have an agent, you can’t keep sending your own novels out, and the agent probably won’t want you self-publishing willy-nilly either. It is a business relationship. Yes, you make money and then your agent makes money. A good agent will want to make you lots of money, for obvious reasons. They may not want you calling them every week for an encouraging pep talk when you have writer’s block. Or maybe they’ll be OK with that. But you have to know that upfront or you’ll be disappointed.

There are plenty of ways to find this stuff out. All over the net are interviews with agents, to start with, plus the information on agency websites. It’s no longer a guessing game. But like anything, you’ll get out of your research what you put into it. Since getting an agent is an important career move for many writers, it pays to put a LOT into it.


I’d love to have a discussion about this – if you’re one of those unhappy writers, you might like to take advantage of the Anonymous option and comment.
Posted by Sherryl at Tuesday, April 09, 2013 4 comments

I was lucky enough to win a free copy of The Crane Wife from A&U, and the reason I put my hand up for it was simply - A Monster Calls, Ness's earlier novel (written from the idea of Siobhan Dowd). I had heard of this book but it was when one of our Hamline faculty, Jane Resh Thomas, read out the first pages to us and gave us all the shivers, that made me want to read the whole thing. I think it was my top book for 2012.

So when The Crane Wife arrived in my mail box, I was looking forward to reading it. The first chapter, where George saves the crane, is like the opening to A Monster Calls - the language is so beautiful and the way Ness describes the encounter is so magical and dark, that you just want it to keep on going for the whole book. Of course, it doesn't. There are lots of other eloquent passages but none, I think, that match the opening.

It's a novel, so we need a story and characters. Plain, ordinary George is caught up by Kumiko, who comes into his copy/print business one day and discovers him cutting shapes out of old books - these shapes are what she needs to complete her tile pictures made of feathers and, in the way of instant celebrity now, the tiles are soon much sought after and people pay big money for them. Except ... the tiles are somehow magical, as are many of the other changes in George's life.

Add in George's daughter, who is unreasonably and uncontrollably angry with the whole world, Rachel with evil intent, the funny and long-suffering printer's assistant Mahmet, the mysterious Kumiko herself, and we have a strange mix of characters who swirl around and bounce off each other without really connecting.

I always tend to look at the structure of a story and, in this case, I think Ness is using metaphor, layering the story in the same way feathers are layered and of differing kinds on a bird. The feathers also act as symbols, so you get the impression of a story that grows and overlaps itself, rather than something with an inexorable linear narrative. I wasn't sure that Ness was completely in control of this - at times I felt the story wavered and tottered under its own ambitions, but I'd rather experience this and think about it afterwards than expect a writer to always play safe and produce something less mysterious!

I believe the story is based on a Japanese folk tale, but it wasn't one I was familiar with and I didn't feel any need to go and look it up (but you can if you want to). It certainly does have that mythological air about it, all the same.
Posted by Sherryl at Monday, April 01, 2013 1 comments