Week 2 of my May Gibbs residency. This week I’m going out each day to do writing and poetry workshops with kids in schools. I’ve been out near Ipswich, up towards the Sunshine coast and learned to work a TomTom navigator! (If you’re not going to be the driver, then the next job is navigating, of course.) Rather than stop me writing, this makes me more determined to write as soon as I get back to my retreat apartment.

It’s great to work with the kids – many of whom “hate” writing because they don’t know how to do it – and give them a bunch of tools for both poetry and story writing. Get past those initial blocks and we start having fun. And producing a lot of writing. I’ve mostly been working with Grade 6 and 7, and been glad to see plenty of volunteers busting to read their writing.

As for my own, I started keeping a writing diary, for several reasons. One was that I didn’t want to get home and think – what on earth did I actually write? So I know that as of today (Day 11) I’ve written about 11,000 words of two different novels, about 18 poems and a picture book. More importantly, I’ve done a lot of thinking, staring out at the church roof next door and the buildings in the distance. I’ve also done a fair bit of walking, to counteract the effects of writing on a laptop.

A retreat is definitely worthwhile considering. I know writers who book themselves into a motel or hotel for a weekend or a week, or go and stay at a friend’s holiday house. Others go away with fellow writers and use each other as “prods” to keep writing. Anything that takes you into a writing space is worth doing.

Life is over-full. For those of us who communicate for a living, the very things we use every day – the internet, email, phones – become the things that intrude into all our leisure time, the time we might use for writing, and suck it away. I’ve been internet-connected while here, but it has been so much easier to turn it off, to turn the phone off, to give myself quiet time with nothing else to do but create.

If you’ve been wanting to take some time out to write, now is the time to plan it. It’s funny how when you are on a May Gibbs retreat/residency, every time you explain it to someone, their eyes light up and they wish they, too, could do this. Well, all I can say is – do it. Find a place to stay for a week or a weekend, book yourself in, plan ahead with your writing project and GO!
Posted by Sherryl at Thursday, May 15, 2014 1 comments

When I think of a writer’s retreat, I have this place in France in mind. It’s on the side of a hill overlooking a valley, the village is medieval and full of old stone buildings and painted shutters and pots full of brightly flowering plants (you know the kind), and the sunlight and fresh air and ambience lead to me writing these amazing novels in no time at all.

Hmmm. Anyone who writes knows even an inspiring French village doesn’t necessarily lead to outpourings of words and masterpieces. But all the same, the idea of a retreat is entrancing. It means you get to go somewhere that is not your home, and you get to shut yourself away from the world. You may not write thousands of words, but you are there to write, so stuff happens.

I am on Day 6 of my writing retreat in Brisbane (warm Brisbane while my home city shivers in early winter freezes) and to be honest, every day here has been different. Every writing day, I mean. The idea that I would come and sit in my chair every day for 8 hours and churn out words has not happened. But that doesn’t mean nothing has happened. Plenty has.

It took me a couple of days to get used to it. The peace and quiet, I mean. But also the idea that I had nowhere to be, no one to answer to, nothing urgent to do for other people or work. It was just me and my imagination and my laptop. I had taken the advice of someone else who had done this retreat* and brought several projects. The one I really wanted to finish? Done on Day 1. I’d spent the last two weeks trying to find the time and headspace to write that last chapter and suddenly, in one day, I was finished. I was a bit stunned.

So what next? I thought. I spread things across my large table and dabbled here and there, but mostly I just sat and thought. Words came, slowly. One project is a verse novel I have been working on for two years. It’s a big challenge, this one, and it’s been going very slowly. This week I’ve clipped pages and notes to the slat blind in front of me, and that has helped – to see it in note form all around me. 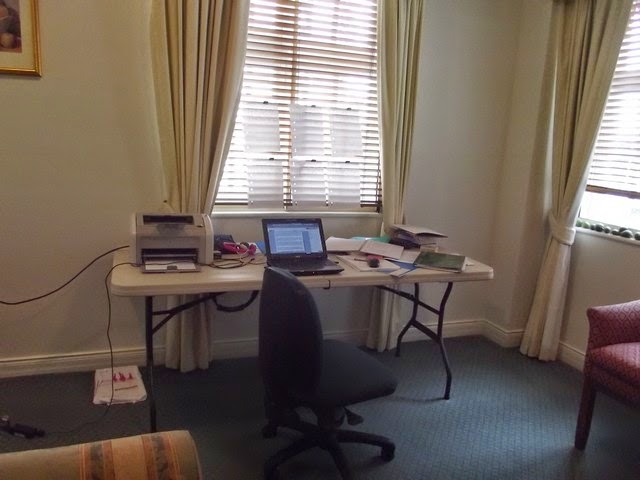 I also had some picture books in mind, and worked on one the other day, without much success. Then I went to an amazing exhibition called Falling Back to Earth and suddenly something entirely new and different emerged. I’ve also been working on something new and experimental. This is normal for me – to have several projects going at once – but usually at least two of them are in “resting” mode. At the moment, all of these things are spread around me, and I work on whichever one is rolling around in my head and wanting attention.

Because this is what a retreat can do. Suddenly, instead of a head crammed full of other stuff with a tiny space for writing, it’s like this empty hall with a dusty floor and sun beaming through the high-up windows, waiting for dancers to come and dance, or practise, or do some pirouettes and grand jetes maybe. You put the music on and invite them in, and your head is full of dancing.

*This retreat is a May Gibbs Fellowship, and every year children’s writers in Australia can apply to have a residency in another city in order to have time to write.
Posted by Sherryl at Saturday, May 10, 2014 5 comments