What do you love about bookshops?

Over the past few weeks, I've bought a lot of books online. (I will duck now as a few people think that's akin to drinking wine with a devil.) But many of the books I've bought are either not available in bookshops here, or are so old that I've had to source them secondhand. I've needed them for my thesis, so it's not like I can wait 6 weeks or more for a shop here to find them. But it did get me thinking about what I do love about bookshops, and as someone said, it's the serendipity.

Many years ago, I discovered Barbara Kingsolver because The Bean Trees was sitting face-up on a row of recommended books at the Grubb Street Bookstore. I went on to buy and read nearly all of her books. Recently I found a book by a guy called John Hart on a display and am now hooked on his books. Similar thing with John Dunning who wrote the Bookman novels (sadly there were only five). For me, that's the first thing a bookshop offers - the exciting possibility of finding a book I wasn't aware of and diving into a terrific story. It's not that I want a page-turner - I want a book that I can sink into and want to keep reading long past lights-out, just like when I was a kid.

Online buying can't match this. I can't pick up the book, read the blurb and then the first two or three pages. All right, sometimes I can, but it's just not the same as holding it in your hand and flicking through and recognising from the "feel" of it that you're going to enjoy it. Sometimes I'm wrong. There have been a couple of hefty Swedish crime novels that ended up being relegated to the donation box. But books here in Australia are expensive - even YA paperbacks are $20+, others are $30. I try to make a solid judgement before buying, and a bookshop lets me do this.

What else do I love? Often being able to have a coffee while I peruse a small pile and make final choices. Seeing what is new, what is popular, what everyone else is buying, just because I'm curious. I don't like sales people asking me every two minutes if I need help. But I like having someone to ask if I get stuck or can't find something. One thing I do hate about very small bookshops - I know they need my money but if I really can't find anything that appeals, I feel terribly guilty slinking out without buying anything!

I used to love Borders (and still like B&N when I am in the US) just because they are so big and I could spend the whole day in there, and a week's wages. But even small shops can have me slapping my own hand to stop way too many impulse purchases. I guess I buy books like some people buy shoes. But all of that love for bookshops still won't stop me buying online as well. It's not so much the cheaper prices (sometimes), it's being able to get books that a couple of years ago I wouldn't have bothered even ordering, because I can, and because someone out there is selling them when I need them.
And my favourite bookshop? The Sun Bookshop in Yarraville. Especially now they have a children's one across the road!
Posted by Sherryl at Monday, August 27, 2012 3 comments

What Objects Inspire Your Writing?

August is the month where children's writers spend an awful lot of days in schools, because during this time is Children's Book Week. If you are lucky enough to have a book shortlisted for the CBCA awards, you are likely to be even more in demand. Nevertheless, schools go all out to celebrate books. I've been to a few dress-up parades with kids in every kind of costume from Dorothy (Wizard of Oz) and Harry Potter to Angelina Ballerina and a teacher dressed as a cow, udder and all. This is primary school, of course. I can't imagine any high school kid being so uncool as to dress up as a book character!

Some authors take to school visits like a duck to water (cliche warning) but most have to "feel" their way into it. A few years ago, the Centre for Youth Literature ran some training sessions to help authors work out how to do a successful school visit, which were very useful. We learned about "show and tell" items, being genuine, telling stories, and being enthusiastic. I remember once hearing Andy Griffith, the king of school visits (and of kid's books here), talking about doing a course in stand-up comedy in order to learn how to create a "script" and present to kids effectively.

There are dangers here, of course. Your script can become too familiar, so that you are sick to death of hearing yourself spout it! You can certainly do too many school visits and lose that important enthusiasm. I still enjoy them, I think because I mostly go to primary schools where the kids love reading and are not afraid to ask questions (including "how old are you?"). I quail at a class of Year 9s who lean back in their chairs and pretend they couldn't care less about books, even if they're dying to ask you something. 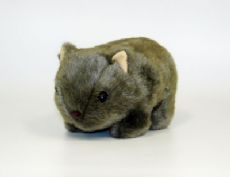 With the "show and tell" element, I often take with me objects that have inspired stories, or helped to create the story for me. On my desk is a very small toy wombat. Five years ago, I bought him on my way to the USA, and wrote a story about him while sitting in San Antonio airport, waiting for my flight. I'd just spent four days with my writer friend, Kristi Holl, talking about writing, so maybe it's hardly surprising that a story popped out, but it was the toy attached to my bag that started it.

Of course, I have a lot of pirate "objects" - everything from a flag and some replica doubloons to photos and eye patches. I show them to the kids, but I think the things that helped me the most with writing Pirate X were the images - old pictures of Stede Bonnet and Blackbeard, and photos I took myself of settings. I also have an amazing cross-section of a Spanish galleon by the artist, Stephen Beisty. It helped me imagine myself on an old sailing ship with a bunch of pirates.

When I look at other things I've written, often I've found the objects after working on the story idea, but every so often there's either an object or an image that has inspired some writing, usually a poem. My latest poem is about Little Saigon, a market in Footscray. I volunteered to write a poem for a project about Footscray, and I couldn't write it without going back to the market again and looking, smelling, tasting and listening.
What objects have led to you writing something recently?
Posted by Sherryl at Saturday, August 11, 2012 1 comments