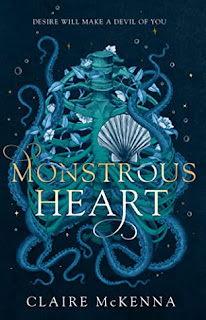 The initial appeal of this novel for me was the krakens – having studied mythical creatures a while ago, I was intrigued to see what the author would do with this as the centre of her novel. The world she creates is fantastical indeed, with a bizarre mix of old and new – we have characters with talents called sanguis (my trusty Latin dictionary defines it as blood), elektrification as a new technology and petro mechanics of different kinds. The mix did at times seem a bit too odd but mostly I tried to go along with it.

Arden Beacon is about to become the Lightmistress of the lighthouse in Vigil, which is in Fiction – it was clear from the start that there was going to be a lot of language play in this novel. Some of it worked, some jarred for me. I found the most irritating bit was the use of real names and terms that were mishmashed together. The world building felt disjointed and illogical at times. Arden is an interesting character, a woman with a past, whose talent is too small to be of real use or value, so she has been told. This post is her final chance to get her piece of paper she needs to be established. Standing in her way are many people around her – the lecherous Coastmaster Justinian and the manipulative Harrow, as well as the mysterious Lions. Nobody is as they seem, including Jonah Riven who is hated by all for mistreating and (supposedly) killing his wife.

There are multiple little twists and turns in the plot, many configured around the constructed world the characters live and function in. Everything seems wrecked or broken or rotting, including the Justinian mansion. The kraken features mostly as the skin Arden’s coat is made out of, which has magical properties of its own. It would be a spoiler to describe its appearance towards the end. I decided the main thrust of the story was, in the end, the romance between Arden and Jonah, although romance seems too wussy a word. Obsession?

The novel started to really engage me about halfway through, but I suspect other readers will get into it much more than me. The language is ornate, at times too ornate, but what really kept pulling me out of the story were the multiple errors of grammar and meaning. Surely you remonstrate with someone (first line)? When describing the girth of something round and thick, span is not the right word. And so on. I itched to copyedit the whole novel as there were these kinds of little glitches every couple of pages and held me back from enjoying the novel a lot more. (I read a published copy provided by HC, not a proof copy, so can’t blame the errors on that.)
Posted by Sherryl at Monday, June 08, 2020 3 comments