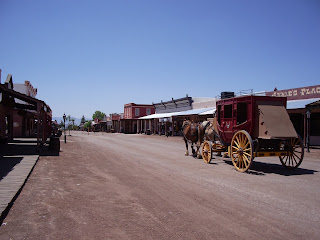 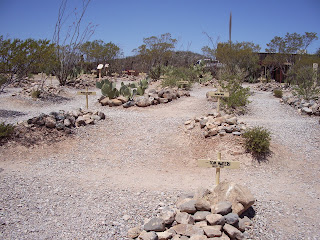 This is the Boot Hill Cemetery at Tombstone. The only grave in the whole place that has the traditional concrete around it with a headstone is that of the guy who spent many years restoring the cemetery - Emmett Nunnelley.
It's funny - you see all the movies that feature Tombstone and hear so much about it that it starts to seem like just a story, but when you get there and see the cemetery and the graves of the guys who were killed at the OK Corrall, you realise that it did actually happen, just not with Val Kilmer and Kurt Russell.

The town itself is, of course, very much geared to tourists. Meg and I saw the Helldorado Wild West Show that had more bad jokes in it than any show in the US, I think, but it was so bad it was quite funny (which was their aim!). There are lots of shops to browse in, some museums and some saloons for eating in. Including one called Big Nose Kate's. I thought it was all good value, unlike Bisbee which was a little further down the road and was kind of disappointing. It's an old mining town, and maybe we missed the best parts, but it seemed a bit rundown and a lot of the shops were more like junk shops than anything. It didn't help that some of them were closed. But it was cooler up there - Bisbee is in the hills.

great pics.
really, i loved them!

Thanks. There are some great things here to take photos of.

One of the things that amazes me is that the West was Wild until relatively recently.