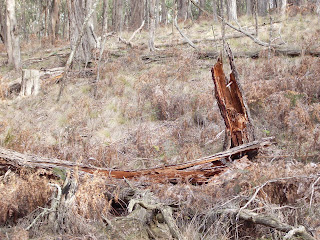 This is what can happen to a gum tree when it's been really dry (like our 8 year drought) and a few insects, probably termites and/or their relatives, move in. One day, for seemingly no good reason, the tree goes down. It's weird to see. We have plenty of gums that have succumbed to high winds, especially on the tops of ridges, but this one was down by the dry creek bed. What fascinates me is the way the tree splits into wedges rather than one great splintered mess.
Why am I a book hog? Because I bought the new Stuart MacBride - Broken Skin - and I have been reading it non-stop for three days. I tried to slow down. I tried to make it last. But I just had to read, read, read, until it was all over.
Aberdeen is still raining, only not as bad, and it's still full of people living in poverty that turns them into criminals, who are then caught by McRae. If you want a crime novel that has the most bizarre, yet entertaining, police bosses on record, try MacBride. Between Steele, who looks like something dragged through a hedge most days, and Insch, who eats lollies non-stop and is 13 stone overweight and about to die of apoplexy, McRae couldn't have a better pair of fictional bosses. A great example of major characters (technically secondary, I suppose, but they both burst the boundaries) who add a million percent to the whole novel. And the plot is multi-layered, with several crimes going on at once. So rather than one serial murderer or rapist or whatever, MacBride deftly handles half a dozen urgent crimes with corresponding investigations. Excellent.
Now I'm just sorry I pigged out, and it's over.
And as for my Super 14 team, the Crusaders, losing their semi-final ... the less said, the better. Sigh.
Posted by Sherryl at Sunday, May 13, 2007