The Computer vs Your Body

I've just spent more than two weeks where I was at the computer or the laptop every day for several hours or more. It takes a toll. I like to think it's just because I'm getting older, and it is, but as we become more and more reliant on computers and technology, and spend more hours in front of any screen, we're going to have to be more pro-active about the ongoing and accumulating effects of this.

Years ago, I worked for a printer as a typesetter. It was an old-style machine with font disks that had to be changed if you wanted to use a different font. One of the main components of the machine was a set of extra keys off to the right-hand side. Now we have a number keyboard there that most of us hardly use. Back then, I used those keys constantly for formatting, so it should have been no surprise to me when I got RSI. In other words, a huge amount of pain and inflammation up my right arm.

Eventually I had to give that job up. Later I also discovered that the rickety chair I sat on, which couldn't be raised or lowered, had undoubtedly made things worse. Aha, you think, it's all different now. We know about ergonomics and RSI and stuff like that. Yep, sure do. But how many writers do anything about it? I no longer have that particular RSI symptom - now I have a ganglion on my right hand from the mouse, and constant neck and shoulder problems. And I'm not the only one, according to writer friends.

So what are the things I am still doing wrong, despite knowing better? I still hunch in my chair instead of sitting up straight. I still struggle to find the best position for using my laptop, even though I now have a separate keyboard for it. I still get engrossed in what I'm working on and forget to get up and stretch. But at least I have a decent chair and it's at the right height.

We get our professional writing students to analyse their work areas to see what needs to be fixed or changed. I sometimes wonder how many of them actually do anything about it. But in the long term, if you don't, you are asking for ongoing, painful physical problems. Today, after several weeks of sustained computer work to meet some deadlines, I went off to have a massage as a reward. But I knew, all the same, that it wasn't just a reward. It was a necessity so that my back and shoulders would stop feeling like pretzels and I could walk straight and upright!

Don't take your time at the computer for granted. Stay aware of what your body is telling you, and do something about it. This is an ongoing problem - it will gradually get worse with time, and the longer you leave it, the harder it is to fix. Just ask my neck!
Posted by Sherryl at Saturday, October 29, 2011 6 comments

The news this week came from the US National Book Awards - in the young adult section, the judges chose five books for the shortlist but somehow six were announced. At first it seemed that yes, an error had been made in the announcement but they would stick with it. Now they have taken one book off the list - Shine by Lauren Myracle - or should I say, Myracle apparently "withdrew the book from consideration". Who knows what went on behind the scenes, but Myracle has behaved most professionally in what must be a horrible situation, and no doubt it has earned her many new fans.

There's a saying that all publicity is good publicity, but with the internet these days, that's not always true. An author a few months ago who tried to defend herself against a bad review received a huge backlash. True, she defended with insults! But in this world where hundreds of new books are published every week, where self publishers are using the net and Amazon to get their books out there, for many readers awards remain one of the standard guides for what is a "good book".

This week also there was much outrage about the shortlist for the Man Booker prize. This is an award for a book that is considered to be the best of the best in literary fiction, and the critics are complaining that the books are too "popular". So apparently the criteria for this award includes "too literary to be readable and/or enjoyable", which is a pity. Regardless of that, the uproar will help sales because all those people who thought the Man Booker shortlist was too literary might now go and buy at least one of them and actually read them!

The quandary with awards is this - they attempt to choose the best in a given year. The shortlist they come up with is a mix of opinion and compromise (the more on the judging committee, the more compromise - this is fact borne out by experience!). But for most awards, this shortlist influences book sales to an immense degree. Here in Australia, if you are shortlisted for one of the Children's Book Council awards, your book is guaranteed an immediate reprint and at least 3000 extra sales (a lot here in Oz).

What are the repercussions of this? For a start, if you get shortlisted, you are very, very happy! If your book doesn't get shortlisted, however (and if you aren't Andy Griffiths or writing a current hot series), your book will very likely die within 12 months and probably not earn out its advance. So the argument that book awards unfairly promote some books at the expense of a lot of others is a valid one.

For children's books, the other option is the various children's choice awards. I'm going to put my foot in my mouth here and say I actually think these are worthless to the author and their book. I mean worthless in terms of sales. For a book to win a children's choice award, it needs to have been already bought/borrowed and read by lots and lots of kids, so if you win one, it means you and your book (because often it's the author who is winning on reputation for great books) are already out there in huge numbers. But they are great validations for you personally, because it does show kids read and love your books. How good is that?!

It's interesting to see some state awards here now include a People's Choice award that is voted for by readers. (I do wonder though about the publishers who email you and urge you to vote - oh well, it all counts.) So awards are providential. You never know when you might get shortlisted, and if you win, good gracious! How wonderful, especially if the prize money is nice. But you can't count on them either. You just have to write, and believe in what you write, and keep on writing.
Posted by Sherryl at Tuesday, October 18, 2011 1 comments 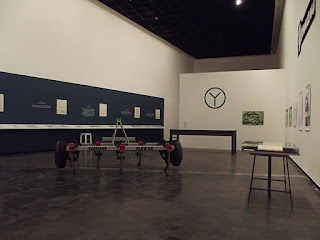 Every now and then it's good to try something new. A while ago, I volunteered to be part of an art "experience". I wasn't quite sure what it would be but I'd done other stuff - writers sports, poem writing at exhibitions, performance writing. This was a bit different. Power to the People is part of the Melbourne Arts Festival and "presents works from over 15 Australian and international artists who have revisited, revised and revitalized these art-making strategies. Works shown by artists including Dora Garcia, Fiona Macdonald, Jonathan Monk and Mario Garcia Torres, demonstrate a move away from the art ‘object’, into more performative, documentative, research and participatory modes of art making." 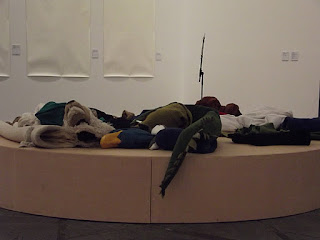 This is another work in the exhibition. People can try on the animal costumes if they want. Most didn't. But one big group of Asian students had a wonderful time. Nothing quite like a penguin wearing a gorilla's head! 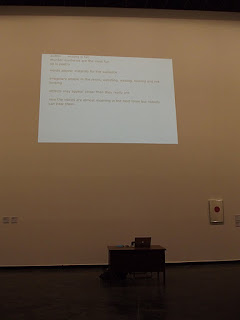 Basically I, and about 20-30 others (we work in shifts), am part of the Dora Garcia artwork (installation?). While people visit the exhibition, we sit at the table with the laptop and write about what we observe - and we are observing the people. The idea is that whatever we write appears above us on the projected image, and that they should at some point realise that we are writing about them. 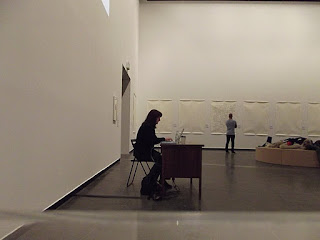 That's when it gets interesting ... or confronting. For both sides. As the writer, I am not allowed to use my point of view or say I or me. I can only be the "objective witness". As the words appearing on the wall above me are the only things that move in the room, most people notice and then realise what is going on. Then they watch you watching them and writing about them.

It takes the role of the lonely writer in the garret and blows it out of the water, although my understanding of the instructions we are given is that it's the audience who are important. The writer is just part of the installation. I did find it hard to keep a straight face some of the time. I am only doing two shifts - all I have time for - but next time I'm going to have a closer look at some of the other works so I can "interpret" some of the body language I'm seeing in response to what is around me!
Posted by Sherryl at Monday, October 10, 2011 4 comments