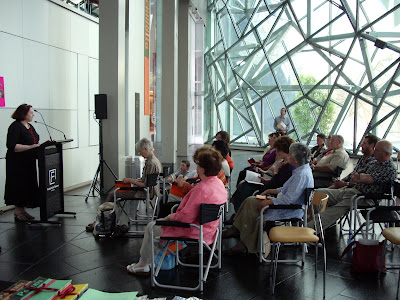 One of the things I do is help to produce a magazine called Poetrix. We publish it twice a year, and have done so for nearly fifteen years. This is a long time in the world of small mags, especially when you consider that we put it together by hand (because the binding would cost us at least an extra $1 per copy). For each issue, we receive and read between 500 and 600 poems, and the editorial group all read everything. Then we have a big meeting where we make final selections.

Earlier this year, the FAW (Fellowship of Australian Writers) asked if we would be interested in reading at Federation Square sometime, so we thought December was a great opportunity to launch Issue 29 of Poetrix. We invited all the contributors who lived in Victoria to be guest readers (and eight of them came along, which was terrific) and several of us read poems by interstate poets.

The venue is quite inspirational, in the Atrium in the area above the BMW Edge theatre. They had a great sound system there that meant outside noise became irrelevant, and people wandered in and out of the space (some even stayed to listen). The photo above is of one of our readers, Helen Cerne, and part of the audience, with the background of the glass walls and ceiling. This triangular web is characteristic of Fed Square, and is also on the walls outside. Thanks to everyone who was involved - it was a very enjoyable afternoon, and ended with an even more enjoyable Western Women Writers' dinner! It's going to be hard to top this with our celebrations for Issue 30.
Posted by Sherryl at Tuesday, December 11, 2007