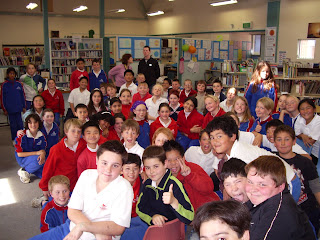 After three terrific days in Canberra, I am home again. I did nine school visits in three days, and in every school the kids were just great. They listened, they barely fidgeted (pretty amazing on a Friday afternoon) and they asked fantastic questions like "Do you like writing in first or third person?" and "What would you want to be if you weren't a writer?" and "What would your publisher say if you stopped sending them stories?" The kids above are from Florey Primary School, my midday Friday visit. I should have taken more photos but I kept forgetting!
One question that came up several times was "Who is your favourite writer?". Now this is a question that I can't answer, because I have dozens, but it did remind me that I've promised several times to put a list of my favourites on my website. That's a job for this week.
While I was away, I read Sarah Dessen's Just Listen - I think she is one of the best YA writers around. She has the uncanny ability to get immense depth into her characters through their thoughts and emotions without being narcissistic or cynical, or even sentimental. Her novels are about relationships, both in families and among teens, and she depicts them so effectively that you can't help but care about the characters and want to know what happens.
I also read another Lisa Gardner crime novel The Third Victim, which deals with school shootings and puts a whole new angle on it. Again, her characters are very real and involving. She is also good at cliffhangers and chapter endings.
Today, I was hardly home (didn't even get the dirty clothes in the washing machine) when I discovered that my first session ticket for the Melbourne Writers' Festival was for 10am, not 12 noon as I'd thought. I raced off to make it in time for a session with Jeffrey Deaver, crime writer, and it was worth it. Notes from all of today's sessions will be coming soon.
Posted by Sherryl at Saturday, August 25, 2007