More on Books about Writing 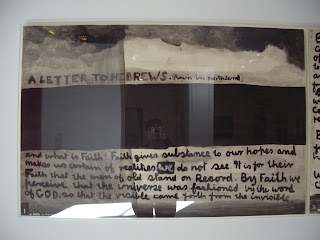 I always say to students: "Have a good look through a writing book before you buy. They often cover similar topics but in different formats or with a different style. See what 'speaks' to you before you hand over your $." For example, some people love Kate Grenville's "The Writing Book", whereas I don't. I find it too "bitsy" and I'm not keen on books that use dozens of quotes to illustrate points.
Robert Olen Butler's "From Where You Dream" is a series of transcripts of his talks to students, many of which I find kind of interesting, but the best part is a story he wrote twenty years ago (one which he considers stinks) and the new version written twenty years later. The new version is not a simple rewrite - it's a whole new re-visioning of the material, the idea, the characters and the POV. When we looked at this in class last year, some people could see nothing wrong with the first story, until we began picking it to pieces. Principally, the main fault was that too much was told, and there was little depth in the story.
The new version required the reader to think more, to work things out; there was less telling, and the style was definitely more literary. The class was divided over whether they liked it or not, but most could at least see what Butler had done with the material.
What have I read this week? A crime novel from Erica Spindler, "In Silence", which I think would be labelled a cosy. The main character was a journalist, returning to her small home town and getting involved with solving murders. I did look up the definition of a cosy, and it seems to have expanded from the traditional "set in a small village with puzzle/murder to solve" into something much wider. I enjoyed this particular book although I guessed the villain before the end (which I don't like to do - I love being surprised - but not tricked).
I'm also reading "The Red Shoe" by Ursula Dubosarsky - great voice and characters, and it gives a real sense of the era - 1950s Australia.
On Saturday my poetry class and I visited the National Gallery of Victoria to write poems about artworks - these are called ekphrasis, to give them the correct term. You are now allowed to take photos of the paintings and sculptures (new rule) as long as you don't use a flash. This is a great help if you want to write a poem, although the gallery shop also has postcards of quite a few of the paintings.
It was quite strange to see the "Weeping Woman" by Picasso, just hanging on the wall along with all the others. (It was stolen a few years ago and eventually found in a left-luggage locker.) Somehow I expected it to be huge, but it's not so big after all! In the Contemporary Art area there was a very long painting by New Zealand artist Colin McCahon. It's all in black, with lots of writing on it (all of his work that I've seen has words on it) but this one began with a panel that was subtitled "Rain in Northland". Seeing as how my family live in Northland in New Zealand, and they've just had the worst floods in 200 years, I thought that was very apt. And took a photo for them!
It's posted here at the top (the glass over the painting means you get a silhouette of me too).
Posted by Sherryl at Tuesday, April 03, 2007

What constitutes a cosy now? How far do the boundaries extend? All these definitions and redefinitions confuse me. (And it doesn't take much to do that nowadays.)

And I think appearing as a reflection in someone else's artwork could be moulded into some postmodern comment on the nature of creativity.

I was quite surprised at how "wide" the cosy definition is now. It's almost as if anything that isn't police procedural or P.I. can be called a cosy.
It's probably only the publishers who like to label books like that, for marketing. I think it can be a bit misleading.
Post modern comment? Hmmm, maybe there's a poem in that!