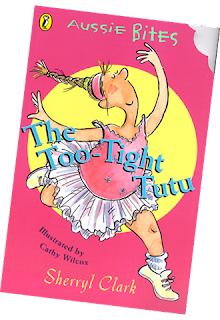 A long, long time ago (in a galaxy right here) I wrote a children’s chapter book called The Too-Tight Tutu that became a kind of classic in Australia, for a while anyway. It seemed everybody knew it, with its bright pink cover and great illustrations by Cathy Wilcox. It stayed in print, year after year, which is something of an achievement in this age of disposable, here-today-gone-tomorrow children’s book series. It was one of the Aussie Bites, which was a terrific series developed by Julie Watts, then children’s publisher at Penguin.

Over the years I have always talked about TTTT during school visits. I show the kids a photo of me dressed as a fairy when I was about six, and sometimes read some of the story (the beginning where Merry talks about being fat), and also talk about how really the story is based on me. I was a fat child who desperately wanted to be a ballerina and, thanks to a ballet teacher who came to our little country school, I got to do ballet lessons for one year. At the end of that year, when it came time to dance in the competitions, they couldn’t find a tutu to fit me (or the character in the story, who’s called Merry). All ends well, of a sort – they find a tutu at last and she gets to dance on the stage in it, although she doesn’t win any prizes. Neither did I. Such is life! I wasn’t going to sugar-coat that, even in a fictionalised version.

But over the past few years, when I have done a school visit and talked about this book, I’ve seen an awful lot of adults squirming, and I know exactly why. It’s because I use the word FAT. Once or twice, I substituted horrible, euphemistic words like large or big or … I try not to remember now. And then I thought – I’m talking about something that is real for a lot of girls and boys, and using euphemisms is something I hate at any time. It doesn’t protect anyone. Fat kids know exactly what you are talking about. I certainly did.

So I went back to talking about being fat as a kid, about not fitting into any tutu other than an ugly black and red adult one, and about having dreams and finding out they can come true. I have a lot of feelings about being fat, about being teased, about all those years of dieting, about why I have spent most of my life being overweight. About why I’m not fat now, which is not some heroic Woman’s Day story either.

Recently I read this articleby Kelly deVos about what she calls Body Positivity and what it has meant to both her and her daughter, and about the YA novel she has written, Fat Girl on a Plane. It’s an interesting piece, because she talks about how she thought she knew all about feeling positive about being fat, taking no notice of fat shaming and all the debates about it. Until her daughter started dieting and she herself was diagnosed with Type 2 diabetes. And it’s still not a simple issue for her – or for anyone!

What is the difference between talking openly about being fat and what that brings with it in our society, and fat shaming? The intention, I guess, like any contentious issue. It becomes even more contentious, weirdly enough, when you try to write fiction about it. Because you can’t usually get away with a wishy-washy character that never has an opinion or strong feelings, or always tries to be nice. So what strong feelings will your main character have about being fat?

Shame? Delight? The urge to confront? (Not likely when you’re a teen.) How about being matter of fact? Of simply telling it like it is? Of showing all sides, or at least showing a layered or multi-faceted view of the topic. Despite TTTT being a chapter book of less than 4000 words, I suspect it has resonated all these years because I was honest about me and what it was like. I knew I was fat. I knew it caused issues, like my mother telling me off for eating too many cakes (usually when she was out), and not being able to fit the tutu I so badly wanted to wear. That was simply the story I told.

I don’t believe shielding or protecting kids from these kinds of facts helps them at all. Like death, like accidents, like friends who dump them, kids know this stuff happens. You can pretend all you like that you’re making their lives better by not talking about it. Ultimately, they know better than you.

There are other things I could write here about being fat but they are not my stories. When I write about fat characters now (which I have in a recent MG novel), I write from the memories of myself in my teens and 20s, and how I felt, and why I ate and ate. I know damn well that MG novel is going to create more squirming, and it may also mean it won’t get published. But like TTTT, I wrote it from my heart. We’ll see what happens next. (And I do intend to read deVos’ book – in the meantime I highly recommend a YA novel called Fat Kid Rules the World by K.L Going.)
Posted by Sherryl at Thursday, May 31, 2018 0 comments