Where did the idea come from for Words in Deep Blue? Can you describe the writing process? 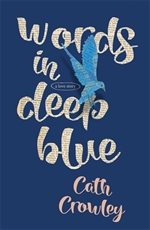 I can’t pinpoint the exact moment when the idea arrived. In the end I discarded the first scene I wrote. It was of Henry’s dad sitting on the veranda. He was writing to Pablo Neruda about love without an address for his letter.

A while after that I opened a copy of A Streetcar Named Desire to see that a stranger had underlined the same phrases that I love. Of course you see this often – but the markings always feel like notes taken in a class, markings directed by a teacher. The underlines on Streetcar felt like a person marking them out of love, or need.

I thought about a whole bookstore where people were allowed to write in books, but that seemed impracticable, and so it became a set of shelves in the store, a letter library: a place where people could write to strangers, to the poets, to people they’d lost.

The writing process was hard! It took me six years to write. The whole time I was dreaming, writing, replotting, and then writing and replotting again.

Was writing this book different from your other novels? In what ways?

I tried to plot from the start! I was studying film structure at the time, and reading everything I could about the correct way to write character - I wonder now if that unsettled my process. I think next time, I’ll write the first draft, and then apply my editing skills to it later. I need to give myself some time to dream.

Your new novel, Take Three Girls, is co-written with two other YA authors. Can you tell us about that process? How did it happen? How did you go about writing it?

It was a wonderful process. We had a lot of meetings where we talked character. Fiona, Simmone and I had autonomy over our individual characters, but we did a lot of group brainstorming. Fiona and Simmone have worked for TV, so I learned a lot from their plotting sessions. It took us eight years to write, but we had a lot of breaks in there. We always said that the friendship and individual writing projects came first. Editing was the hardest part for me. It’s hard enough editing when you’re the only one making changes. But when three people are making changes, at the same time, on a manuscript, it’s logistically difficult.

We hear a lot about authors having to promote their books now. How do you approach this? Any tips to share?
I do what I love now – speaking to young people and running writing workshops. I don’t have tips as such, but I would say you have to protect your writing space. Take yourself away from the crowd (if you can) to write without distraction.

You also teach creative writing. What kinds of craft and skills do you think a writer can learn that will help them? What can’t be learned?

I do think writers can learn craft and skills. It’s good to study the work of good writers – study how they write dialogue, structure scenes, use language, write character. I loved studying structure. What can’t be learned? I can’t put it into words, but I read a book like Jennifer Egan’s A Visit From the Good Squad, and I know there’s an X factor that can’t be taught.

What are you reading at the moment? What are a few of your favourite books?
I’ve just finished State of Wonder by Ann Patchett and loved it. Loved Hunger by Roxanne Gay. I’m in the middle of The Answers by Catherine Lacey, and loving it. My favourite YA of late is We Were Liars by E. Lockhart. It’s a brilliant read.