Continuing with their listicles...

5 Things I’ve Learnt About Writing From My Writing Course

1. I’m not as #flawless as I thought I was
When I applied to the course, I thought I was a fully competent writer with little to learn. I was seeking validation and a piece of paper that proved that I was—more or less—the greatest writer who ever lived.
Did I expect one of my tutors to discreetly take me out into the hallway to inform me that someone of my skill level had no place in the course and that I should probably get in touch with Penguin right away? Well, I may have thought it once or twice. Of course, if you didn’t see a headline that went something like, ‘Melbourne Writing Megastar Found in Footscray Writing Course’ then you probably know it didn’t happen.

2. The ‘basics’ are actually not-so-basic after all
Before the course, when anyone asked about my writing, I always said that one of my main goals was to burst onto the writing scene with wildly abstract pieces of writing that broke all the rules and challenged society's notions of writing was. And I mean, that still sounds nice and cool and stuff, but I quickly found that there were more ‘basics’ than I had initially thought, and that even some of the most successful writers in the world aren’t even necessarily masters of them.

3. There’s a lot more to ‘verbs’ than meets the eye
In my first semester, one of my favourite things to tell people who asked how my course was going was to tell them that we had spent over a month strictly learning about verbs and watch their eyes widen in horror. It’s safe to say those ‘doing words’ did my head in—and they still do, especially since there are still words out there that only ‘act like verbs sometimes’ and nobody seems to be doing anything about them and their confusing, unhelpful existence.

4. Turns out, I had never actually been properly taught grammar
See above.

5. I may not be ‘fully competent’ but I am capable
Though I haven’t been whisked away to a lab so they can study my powerful, intrinsic writing abilities, I’ve learnt that I’m capable and that there is no writing task that is too impossibly big or difficult, as long as I tackle it head-on. 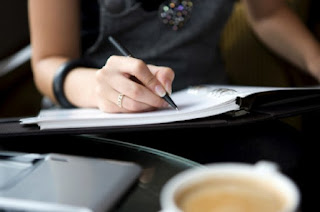 
DOTTING THE I's AND CROSSING THE T's.

Or, crossing the i's and dotting the t's...and the g's...p's and q's because there's five things I've learnt from studying this wonderful writing course - and they go like this.

It's not easy...
I dropped, pretty quickly, any pre-conceived ideas I may have had about the learning being black and white, right or wrong. And I learnt to ignore the persistent voice in my head chanting to me that it'll get easier the more I learn and the better I get. If anything, the writing's harder, and with knowledge comes responsibility. Sometimes, responsibility sucks!

The nuts and bolts need constant oiling...
Structure, plot, narrative, characterisation, show don't tell, tighten, research, punctuation, spelling, editing and more. The theory...it's the tool of creativity. And then there's that word 're-draft' and the back-breaking process that accompanies it, which this course has intimately acquainted me with.

I've learnt a lot...
And been encouraged to explore my ideas, my values and my morals through my writing. To be brave and creative and challenge myself. To take risks. The emotional side of writing has been my constant companion.

Believe in myself...
Because yes, belief in oneself can be taught. Even though it's about our genetic predisposition, it can be tapped into, nurtured and encouraged. As a mature-aged student, building self-confidence has been hard. I've had to dig deep and project back into my past to conjure up new futures.

The bits you don't sign on for...
Friendship, mentorship, companionship, like-minded passions and interests. Authors. Writers. Sublime literature - and books. Lots of books! The writing process has been and continues to be bitter-sweet, and the learning satisfying and exciting.

1. You’ll leave the course knowing how to write solid first chapters. You’re practically an expert in this and should get paid to write first chapters for everyone.

2. Workshopping isn’t as fun as you think it’s going to be.
At first it’s cool and at times nerve-racking to have your work read by others for the first time. But trust me, there is such a thing as too much workshopping. You’ll spend more time doing this then actual writing and you will quickly begin to loath the whole idea.

4. You’ll begin to question whether your teachers communicate about assignment dates.
Two 2000 word assignments due on the same day should be illegal.

5. In the end, your teachers are the best resource you have
They’ve all worked and struggled through the writing industry and you’d be a fool not to take their advice on anything.