Writing in the middle of high emotion

One of the things that makes poetry readers shudder is the poem written from inside ecstatic love, full of gushing and cliches. Coming a close second is the raw grief poem. We are told, "Don't write while you're in a state of high emotion because you're too close to it."

As if that somehow blights the poem, or the true story (because we are told this about personal writing of any kind). It's true that writing in these states does often make for awful writing, but it's likely that the writer simply isn't skilled enough yet to be able to use the language well enough to convey what they feel. They would probably write poor landscape poems, or sonnets, or ... We all know that feeling of This is too hard for me. I need to get better at writing before I tackle it.

Yet that doesn't mean you shouldn't write at all. Just that you probably shouldn't consider your heart poured out on the page as ready to share yet. It's a first draft, that's all, like any first draft. Hold on to it, give it time, rework it until it really does say what you want, in a way that evokes your idea for the reader. Often that's through the "less is more" guideline.

In fact, I'd say that writing how you feel, however clumsily or gushingly or with tears dripping onto the page, is a great way to deal with your emotions. For too long, "writing as therapy" has been scorned, or derided as only for hobbyists. I've been studying fairy tales now for 18 months, and part of my research is about the ways in which fairy tales help traumatised children. I'm also writing my own tales - new ones - and trusting my unconscious to take a spark of an idea and run with it, writing whatever comes out. As I have been doing so much reading of the tales (Grimms in particular, but others, too), the structure falls into place without me thinking too much about it. The fascinating part is looking at the story later and trying to figure out what came out of my unconscious and, more importantly, why. It's called practice-led research.

But in the past few weeks, my writing has taken a different path. Where I go on weekends to write - a wonderful bush property with trees, wildlife, native plants and birds - was totally burned in recent bushfires. It's been so hard to keep going there, to face each time the devastation all over again. Blackened trees, scorched earth, ash, everything gone but (miraculously) our tiny house.

At first I thought I could never write about it. I couldn't get past the shock and grief I felt every time I looked around. I kept seeing what was missing - the wrens and wagtails that used to frolic in the birdbath outside my writing room window was just one of many things that may take years to come back. Even being inside the house and almost forgetting - looking out the window was like a slap.

But then I decided I wanted to write about what it used to be like, and remember all the things I loved about the place. The day I came face to face with a wombat. The native flowers in spring. The silvery glitter of sunlight on the gum leaves. And as well I began to write about the aftermath of the fire. How I felt about it, how I feel now. I'm using language the best way I know how, trying to capture these emotions but also capture precious memories. It's doing me good. It'd probably be labelled "therapy writing" but I hardly care. This is about me, this is for me. That's what matters right now. 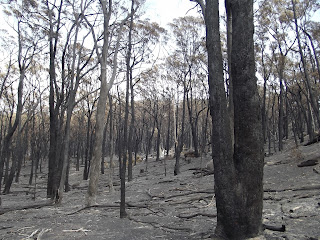 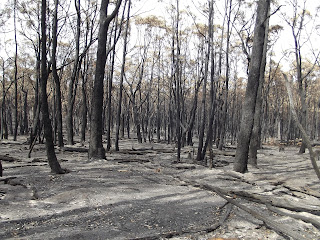 More than six years ago, I started a photo blog of this place. It was a hobby (I like taking photos) and it was a discovery record - every season I found new things growing. Now I am rapt that I did this, and kept at it. I'll keep updating it now, I hope as a record of recovery. It's here.