It’s the words and sentences

Recently I went to a poetry workshop with Simon Armitage. While he said a lot of useful things, the one that was still ringing in my ears a few days later was this: “I might redraft a poem 12 or 15 times, and by the final draft usually every word that was in the first draft has been changed – to a better word.” He explained that he wasn’t talking about the words that join everything (and, but, the, etc) but the ones that are doing the work.

It reminded me of another event from a few years ago – four magazine editors talking about what they do as editors and what they publish. One, who had been writing and editing for many years, said when she first started, a lot of people were writing competent or very good stories that would get published. Now, competence or “very good” is not enough. You have to be a “stand out” in terms of character and plot and theme, but also in the actual writing, the craft.

These days a lot of people write and most of them want to be published. In a Brisbane Writers’ Festival session I went to yesterday, Isobelle Carmody said, “Lots of kids and teenagers write. They write whole books. So do lots of adults. But you get published because you rewrite and rewrite.”

So I think the question that comes out of all of this is – what do you do if you are writing and rewriting, and still not getting published? How do you work out what’s wrong, what part of the craft is still lacking? It’s too easy to say there will be an editor out there somewhere who loves your novel, because that means you disregard all those other editors who have said “not ready yet”. A lot of people also say that editors are wrong, or don’t understand what they’re trying to create, or only care about blockbusters, and so they self-publish.

Nothing wrong with self-publishing. If you do it for the right reasons and know what you’re doing (and paying some “publisher” $10,000 to publish your book is NOT self-publishing – you are getting scammed!).
But the question I’m trying to answer here is about what is lacking in your writing that means you are “competent” or “very good” but not yet publishable. You may not want to examine and change every word like Simon Armitage, but then again, maybe you should. Over the years, I have read many, many chapters of novels and some full manuscripts, sometimes for critiquing and often because they are students’ work for assessment. Sometimes it’s a plot issue (there isn’t a plot or it doesn’t hold together), sometimes it’s poor characterisation. But overwhelmingly what I see is a lack of craft at sentence and word level.

This might mean repetitions, redundancies, vagueness, bad grammar. But those are editing fix-ups. What pulls writing down into being something tedious to read are things such as:
·         * all the sentences are the same length
·         * the characters all sound the same
·        *  the writing and POV character have no “voice”, no rhythm, no cadence
·         * the writing is boring – no imagery, no metaphors, no fresh expressions

These things are harder to fix. They take a lot of awareness about the problem existing and acknowledging it is a problem (which is where the writers who realise it head for a good freelance critique or edit). Then they take a huge amount of work. Work at the word and sentence level, line by line, paragraph by paragraph. They take a revision where you might have to replace more than 50% of what you had originally written.

The bonus of this kind of hard work is that you will learn so much along the way that your writing will never be the same again (and it shouldn’t be – who wants to be just competent?). For me, every novel is about learning how to write that novel. Create that voice. Use that particular language, choose those particular words. The work I do won’t magically make the next novel easy, but it will help. And every novel that teaches me more about my own writing will make my writing better. I still think I have a long way to go with that, but the challenge keeps me interested, not just in the plot and characters, but the act of writing and then revising.
Posted by Sherryl at Saturday, September 06, 2014 5 comments

The end of the revision

I am currently 3 days from the end of the most intense fortnight of writing that I have had in a very long time. I’ve had a May GibbsFellowship this year, which has meant four weeks in a small, quiet apartment in Brisbane, far away from work, telephone, cooking meals and other daily distractions. For several reasons, I chose to take my four weeks in two lots, and the first fortnight included writing workshops in schools.

While I’ve done a lot of creative first draft writing (in both fortnights), this time I also had a major revision on a YA novel to do. Eight pages of detailed notes from a very good editor to contend with first (I think every writer knows that feeling of panic when you see notes like these and think, I can’t do all that!). Then it was head down, and total focus. Most days I have done at least four hours and sometimes six or more. There is no way I could have achieved this level of intense work and concentration at home.

A major character I added into the second half of the novel in the last draft? Gone again. Several large plot holes? Filled and expanded. Background world building and technology? Expanded and developed more deeply. Character arc? Carefully finessed. Then it was another pass of the manuscript for more polishing. Hour after hour after hour, right inside the world and the story and the characters I had created. I went out for walks to help my aching back and stiff neck (taking my main character with me) and coffee (taking a notebook to make more notes and write down new ideas and thoughts).

Now I’m done, for this draft at least. I’m sure there will be more redrafting to come. But I feel a bit lost, a bit … adrift. I’m looking forward to getting back to my new project, but first I have to reshuffle the headspace, tidy up, put away that world for now. It can be hard to change gears, from picky revision to free-wheeling first draft.

But I have several good ways to help that along. I can read a great novel in a different genre. I can write some poems or do some free writing. Or I can go and see a thought-provoking movie. I’ll miss my May Gibbs time! When I go home, I want to really try to maintain that sense of focus and keep the distractions away. Right now, I might just celebrate a completed new draft. 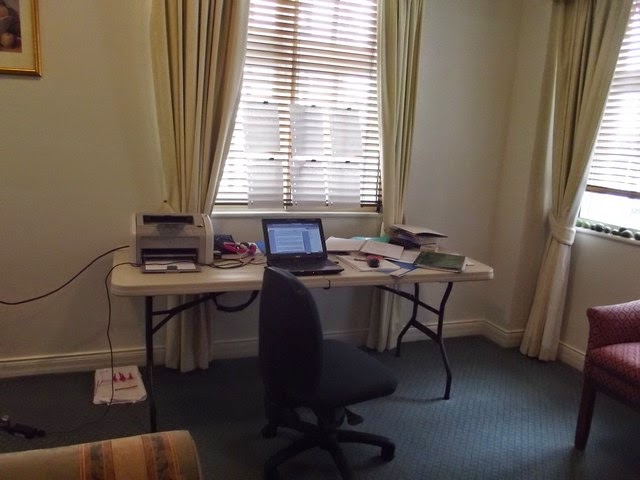