This is the editorial I wrote for No. 40 - I debated writing something different but really, this says it all!

It’s hard to believe we have come to the final issue of Poetrix. It’s not the 40 issues so much as the 20 years! A rough estimate would put us at publishing around 1200 poems in that time, which might not sound like much but it’s been amazing how many people have written and told us that Poetrix published their first poem, or inspired and encouraged them to keep writing and submitting. Many poets who have appeared in our pages have gone on to publish collections; several have appeared in Best Australian Poems anthologies.
In this inaugural year of the Stella Prize, with all the discussion of “do there still need to be awards for women writers”, we stand tall and say “Yes”. We began Poetrix in 1993 because of two things – a survey published in the NSW Poet’s Union newsletter that showed a marked imbalance in male vs female publication and reviewing, and a passed-along story about a male poetry editor who refused to publish poetry by women that he called “domestic suburban vignettes”. 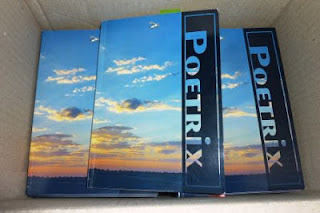 So, as women so often do, we rolled up our sleeves and went to work. Literally. We cooked and catered for book launches and lunches, and earned ourselves enough seed money to start the magazine. We have always put each issue together by hand, around a kitchen table, and kept our production costs low, so we have never needed to go looking for more money. Yes, women are self-sufficient and thrifty, too!

In 2010, an organization called VIDA: Women In Literary Arts undertook a project to count the rates of publication between women and men in many of the writing world’s most respected literary outlets. Sadly, nothing much seems to have changed since we first launched Poetrix 20 years ago. You can see their results at http://www.vidaweb.org/the-count. But they believe that by doing this and keeping the conversation going, change will happen. We hope we have been a part of that, however small.

Have we published domestic suburban vignettes? Undoubtedly. After all, doesn’t all the real drama of life happen in the home and in the suburbs? The personal is still political. Women speaking out – about death, grief, longing, dementia, divorce, children, their experiences, what makes them laugh or cry – creates powerful poetry. We don’t much care if that doesn’t speak to men, but we suspect it does, all the same. Why on earth wouldn’t it?

What has kept us going all this time? A sharing of the load, first and foremost. We’ve always had a solid core of 5-6 of us, with others helping. Our editorial process is cumbersome (everyone on the committee for that issue reads everything and votes) but democratic. People get to stand on the table for poems they absolutely love that no one else is keen on. Generally, when the committee numbers 5, it takes 3 definite Yes votes for a poem to get in. It’s the Maybes that cause the most discussion!

It means that a wider range of poems are published than if we just had one person choosing, which is a good thing. Poetry is nothing if not subjective. For the Selected section of Issue 40, each of our current five editors chose five poems from Issues 1-38. That was an enormous amount of reading, with long shortlists, and the proviso that a poet could have only one poem in the Selecteds. Again, you’ll see a wide range of poems here, and sadly not all of our most consistent contributors are represented. But it was an individual choice. Could you choose five from 1200?

In almost every issue, we have published one poem by a Western Women Writer. Poetrix has never been just a showcase for our own work, but we did want to show that we, too, wrote poetry! In Issue 40, we have one from each of us, chosen by the others. And of course we have our usual new poems. We think our Selected section definitely stands the test of time.

You may notice that on our cover are two aeroplanes. One is the Lockheed 5B Vega flown by Amelia Earheart. The other is the de Havilland Gypsy Moth flown by Amy Johnson. Why? Firstly because back in 1993 it seemed logical to us that if a female aviator was an aviatrix, then a female poet must be a poetrix! So for Issues 1 and 2, Adrienne Mazer-Swinton, fellow WWW and artist, drew our planes for the covers. She also drew racing cars, sculptures, spaceships and yachts – all areas in which women had excelled and broken records. We are incredibly sad that Adrienne is no longer with us to share the celebration of 40 issues.

There are many, many people to thank. All of our editors over the years, for a start, and those who helped us earn our seed money. Flashprint (for designing our covers) and the Victoria University Print Room for printing the insides. Tracey Rolfe for doing nearly all of the typesetting over the years, and being our editor-in-charge-of-grammar-and-style (and for the photo on the final issue).

We also thank our many contributors, some of whom have sent poems in for 20 or 30 issues, and kept sending despite rejections (but their persistence and dedication to craft has paid off, too). We also thank our subscribers. Some have subscribed for almost every issue, and Janet Limb has even subscribed for her three daughters, as well! All of this support, along with wonderful letters, has made us feel like Poetrix has been a worthwhile, valuable thing to do. We thank all of you who have sent letters of sad farewell and thanks when you heard that this was our last issue.

Will we start publishing again one day? We’ll never say no. With the advances in technology, you might see a Poetrix e-magazine one day! But for now, we’re hanging up our poetry editorial boots and slipping back into our poetry writing shoes (the red ones with the high heels and sparkly sequins). What do we wish for you all? That you will keep writing poems about subjects important to women, and important to the world, but more than this – we want you to send them out to all those other magazines and keep the voice of women poets alive and resoundingly loud!