Patrick Ness at the SWF 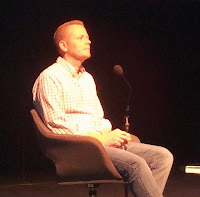 I freely admit that I travelled up to Sydney for the Writers' Festival so I could go to the sessions with Patrick Ness and Kate Atkinson. Why? Well, yes, they did do sessions in Melbourne, but I wanted to be at a writers' festival where everyone was talking and thinking about writing fiction, for a change. Instead of social issues and politics. And let's face it - great fiction does that anyway, without being pedantic about it. Just ask Mr Ness about the Spackle!

The session on Saturday with Patrick Ness was great. And I am here to tell you that he is funny! If you read his books (especially A Monster Calls), you might not think so, but he was very witty and dry. I failed to take detailed notes in this session because I just wanted to listen. Later, things came back to me that I jotted down, and he did repeat a few things in the Sunday session with Carlos Ruiz Zafron. But here are the things that stuck with me (a little paraphrased in some cases):

* Writing vernacular is a lot more fun than reading it (we might also call this dialect). He started writing Todd's voice in the Chaos Walking books in deep vernacular, which didn't work, and it was only when he kept simplifying it that the voice finally worked and he found it. Even third person, past tense has a voice.

* He said he needs 3 or 4 or 5 things to start a novel - images, scenes, ideas. He thinks about how they all connect until he gets an "exit feeling" - the last line. He never starts a book until he knows the last line. (If you think this is unusual - the big scenes and ideas - read "Write Away" by Elizabeth George).

* "A book is not a song. It's the performance of a song. So you can take an idea that has been done before but it's the way you perform it."

* He wants to treat his teenage characters as complex beings - people who are complicated make mistakes. He talked about "A Monster Calls" - the moment when a character realises they are capable of believing contradictory things. 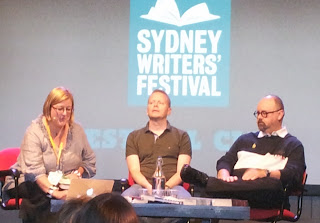 * He often has people tell him that they want to write a novel one day, "when they have time". He says if you want to write, you will be writing now. You will always be writing, working on a project, if you are a writer.

And the thing that Carlos RZ said that stuck with me was: "I have to squeeze out every letter, every word. I have to animate my characters myself. When I write, I am trying to get into your brain and rearrange the furniture." For once, not one writer I heard waxed lyrical about being swept away by story and characters - they were all quite honest about the hard work that writing really is!
Posted by Sherryl at Tuesday, May 28, 2013 4 comments

I have to say I do enjoy a good, scary picture book, especially one that's a bit weird or different. Two of my favourites are The Wolves in the Walls by Neil Gaiman and Wolves by Emily Gravett (coincidence that they are both about wolves? Maybe not, given Red Riding Hood etc). I've also used Bruno Bettelheim's book, The Uses of Enchantment, in myths and symbols classes, where he talks about how original, scary fairy tales can help children overcome fears.

So when I heard about the new picture book called The Dark, I was keen to read it. I even bought my own copy! So what do I think of it? Well... a bit disappointing. Maybe that's because I'm an adult, not a five-year-old, but there are a couple of things that didn't work for me. However, there were things I did like. I like the first half a lot, and the illustrations. It's a story about a boy called Laszlo who is afraid of the dark. The dark lives in his house, specifically in the basement, and is presented as though it's a living entity.

By nearly halfway through the book, things are getting scary. Laszlo has tried to "manage" the dark and keep it in the basement, but one night it comes to visit him in his room (the picture shows you that his nightlight goes out). At that point, the dark says, "I want to show you something." Laszlo takes his torch and goes all the way down to the basement, and finds an old chest of drawers, and the dark wants him to come "even closer".

Then we get a whole page full of text which is this kind of adult philosophical speech about why the dark is useful. Huh? What happened? All the tension is gone, all the scary stuff goes pfft. And then the story resumes. And the outcome is just kind of nice and tidy, and the last three double-page spreads are pleasant and affirming that the dark is good.

I'm not sure what is going on here. I've seen one review that asked the same question. Did the editors fall in love with the story and let Snickett/Handler get away with the diversion into dullness? Or did they really think it worked? Other reviews are full of praise for the book (it helps that the illustrator, Jon Klassen, has just won the Caldecott Award for This is Not My Hat), but it gets 2/5 from me. It makes me feel as though there was another story to begin with, somewhere, one that stayed scary all the way and had a really satisfying, victorious ending, and that story ran away or got "nice-ified". But this is a review, and it might just be my dark heart talking!
(There is an audio clip of Neil Gaiman reading the first bit of the book but it's only 40 seconds)
Posted by Sherryl at Thursday, May 09, 2013 0 comments

How do you know your writing is improving?

Those of you who read this blog will know that I have been spending the past 22 months studying at Hamline University in Minneapolis/St Paul, Minnesota (graduating soon). I'm doing an MFA in Writing for Children and YA. Has it been hard? Yes. Especially when I was working. This year I have taken 12 months off work to complete my last semester - this is when I work on my creative thesis, which is a novel. Has it been worthwhile? YES! Before I went off to Hamline, I had around 45 published books out there, and a lot of people asked - why would you want to study? (Subtext: aren't you already "there"?)

Well, no. Like most writers, I suspect, I'm rarely happy with my writing. And when I am, it can turn out that people in publishing are not. That's the reality. Writing is a craft, and as soon as you think you know everything there is to know about it, it tends to leap up and slap you with a wet, cold fish. That fish can be of the species "remainder table", or the species "horrible reviews" or even the species "your story ideas are old fashioned and we want something HOT".

If enough time passes between my writing and re-reading, I am quite capable of declaring everything I write is appallingly bad, and it's time I gave up. Doing the MFA has gone a long way towards saving me, because I went into it determined to write daringly. To have a go at things I might have not dared otherwise. To learn as much as I could about the craft (which is why I loved the critical essays, and even the thesis - sometimes). And to try my hardest to IMPROVE.

Even though I'm not entirely sure what that means. In today's publishing world, it probably doesn't mean what I want it to. Writing better doesn't mean I will come up with the next new hot chapter book series, or the next best-selling trilogy (of something) that will get optioned for a movie. Writing better doesn't seem to necessarily mean every editor will be anxiously waiting for my next book.

Writing better will mean to me that when I get a fantastic idea, I'll be able to create it on the page as a story that readers will love to read. That's the key - being able to grasp what is in my head and move it onto the page and be happy with it, instead of despondent that it's not nearly as terrific as I thought it was. What does give me hope, though, is that most writers feel like this. It's a bit like seeing that beautiful, glowing stone shining up at you through the water, and when you reach down and grab it, once it's in your hand, it turns out to be rather ordinary and dull.

So how do we know when we've improved? One way is to keep all of your old drafts of stories and bring them out and compare. I have horrendous stuff that I keep just for that purpose (no matter how much it makes me cringe). Another way is simply to do it - work hard on your craft, and I think you will know in your heart when you are getting better. Don't take any notice of family (unless they are good critical readers). Test it by sending it out, then rewriting, and trying again. A big part of craft is perseverance. That's what counts in the end - the realisation that work is what it takes, and the real desire to do better every single time.
Posted by Sherryl at Thursday, May 02, 2013 0 comments