Book Ideas in the Ether 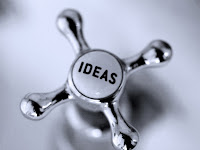 Trends are one thing - dystopian fiction now, vampires two years ago, in two year's time it might well be historical romance. But ideas that seem to come to unconnected writers at the same time are different. I'm a co-editor of a poetry magazine, Poetrix, that publishes two issues a year of poetry by women. We are regularly amazed at how poets from all over Australia suddenly send us poems on the same topic or theme.

I'm not talking about current events such as the Arab Spring, which often inspire poets to respond via poems. Rather I'm talking about things that just pop up. Half a dozen issues ago, we got a whole range of poems about widowhood. For another issue, it was the sea. An early issue brought a number of poems about death. Another topic later was euthanasia. Most recently it was walls - garden walls, house walls, tumbledown walls. We have no idea why - we don't set themes - it just happens.

There are studies that have shown it's not an omen when you suddenly start seeing red cars everywhere, or reading books in which a camera is lost over a cliff - it's just that once you notice the first one, your brain somehow decides to "take notice" of all the other instances that might normally pass you unnoticed. Or so the studies say!

The other side of this is writers who are working on a novel they believe says something new or has an original story idea that they are sure no one else could have come up with. And within a few months, there's a book published that "pinches" their idea. The truly paranoid believe that somehow their idea was stolen, even if the writer lives on the other side of the world. But there is sometimes credence in this when, for example, a new writer has sent in a spec script to the producers of a TV show, and been rejected, and a few weeks or months later, that concept turns up in an episode.

Wouldn't you feel a bit suspicious?
The only true remedy for all of this is to keep developing ideas - lots of them. Recently, our students listened to a great talk by freelance writer, Sarah Marinos, and she described how she comes up with article ideas. One of her key strategies is to sit down with the newspaper every day and pull out possibilities and then (importantly) look at ways to develop them into several different ideas. She takes the next step - pushing the concept into more original directions.

Fiction and poetry writers can do this, too. Grab today's newspaper and see if you can come up with six new ideas for stories or poems. Do it every day for a week and you'll have more ideas than you could write about in a month, or a year. But don't use the idea of a mother's house being shot up because her son is in trouble with drug dealers. My friend L has already written a novel about that!
Posted by Sherryl at Friday, April 06, 2012

You know, early in my career, I used to do this and keep whole file boxes full of clippings. I do all my news reading online now--like many people--so this has become largely a lost art. I must learn a new system, and keep an "IDEA file" open on my computer when I'm reading news online.

C G Jung had a word for coincidence or things that just happened at right time for you. I just wonder when you mentioned that people all over Australia from time to time seem to send you poems on the same or similar topic or theme. - Synchronicity!
I wonder if your experience with submissions may follow an unknown pattern?

Kristi - I have started using Evernote (the free version) and I "clip" everything useful and store it in notebooks. My Bookmarks list is too long and disorganised, but Evernote lets me store urls and articles in labeled folders.

I'm not sure why or how it happens, Paul, but it's fascinating. We often approach reading poems for the next issue now wondering if some common theme will arise. Sometimes it doesn't! But I like that word.