The Problems with the Hole Borders Leaves 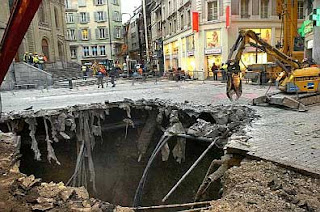 While I was in the US, a lot of keen book readers were sad that Borders seemed to be finally going right under (although there was news of a last minute buy-out of some stores by Books-a-Million today). In Australia they have completely gone. I've seen several posts by indie bookstore owners responding to Borders' demise, and it's been interesting, to say the least. While we would expect indies to be rejoicing, this hasn't been the case. Responses have been mixed, which set me to thinking.

The first feedback I had on this was from someone who works in my local indie bookshop. Our nearest Borders was at Highpoint Shopping Centre and, while there are a couple of Dymocks around, Borders had quickly become a place where you could get just about any book. For a while. I would pop in for a look and come away with more than one book. Then their stock seemed to change, focusing on recent releases and popular fiction (dozens of vampire novels, for a start), and other sections started to shrink. The gimmicky stationery and gift section expanded instead. I thought it was just me, but others said the same thing. I stopped going there, or I'd visit and come home with nothing!!

A lot of comments I've seen in the past few weeks have said Borders lost their way. I'd agree with that. Book buyers love finding new authors, trying out new books, discovering new writers to be passionate about. You don't get that in BigW or any store that just provides bestsellers. And when Borders reduced their range to books you can get anywhere, they reduced their appeal.

So when my local Borders closed, I thought the indie would receive a huge increase in sales. They haven't, at least not noticeably. What has happened is that people now want them to stock the mass market/move tie-in books that previously they haven't bothered with. They know their regular customers and what they want, and the mass market stuff isn't it. They have a small, cosy store with limited shelf space, and they don't want to fill it with the same books you can buy at Target or BigW. But they don't want to lose potential new customers either. It's a dilemma.

The other problem in my area (and one I perceived in St Paul where I have just been) is that when you have a big store like Borders open, two things happen. One is that competing stores, both chain and indie, have a hard time surviving. A lot of them disappear, leaving just Borders as the "king". The second is that people who might not buy a lot of books, but who like this big shop that stocks such a variety (and offers discount coupons etc) find themselves visiting and buying. It's convenient and fun.

When Borders closes, this has a double impact. Borders has killed off other bookshops in the area, so they leave an unfillable vacuum. Who, in this economic climate, is going to open a new bookshop? Following on from that, all those people who got used to buying books because it was handy and inviting now have nowhere to go. They are unlikely to travel to another suburb just for books. They will go online, if they go anywhere at all. They might not bother. They might go to KMart instead and buy a video.

By the way, on my way back to Australia this week, I did a quick scan of my fellow plane passengers as I wandered down the aisle. My estimate was one adult in four was reading a book on either an iPad or a Kindle (or similar device). One in six was reading a paper book. The rest were sleeping or watching the movie. And for the record, I managed to fit 17 books into my luggage that I'd bought while away, but to have them all on an ereader would have been nice (although I have built up some handy muscle strength instead!).
Posted by Sherryl at Friday, July 22, 2011

Just read a post on Twitter that in February ebook sales were the largest selling format in the US!

They have certainly overtaken hardbacks. But then hardbacks in the US are $20 and they think that's expensive. Fellow students nearly fell over when I told them our hardbacks are $45+ and paperbacks up to $32!

I found that both Borders and their associated Angus and Robertson shops often sold books above the RRP.

I was therefore not suprised when their financial problems were revealed.


My opinions were shared here: