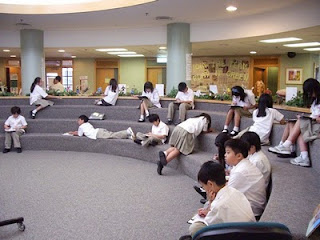 This is Day 8 in Hong Kong and I feel like I have been here for several weeks! It's been incredibly busy but excellent in so many ways, starting with all the great schools I have been to. Very often I do author talks, which are a lot of fun as you never know what the kids are going to ask you. One day I'll make a list of the most unusual questions.

But this time I am doing mostly writing workshops, many of which are poetry. It's been so good to see them all (even the ones who have never, ever written a poem) tackle the exercises I've been giving them, and coming out with some great poems. I've also been doing story writing with a wide range of students from Grade 5 up to Year 12. The photo above is a class of Grade 5s at the Canadian International School, all busy on their story beginnings. 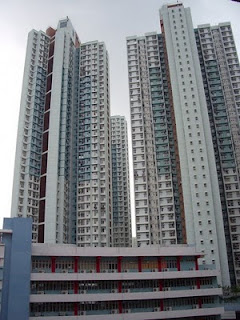 Schools here in Hong Kong are multi-storey - I don't think I have been to one that is all on one level, like most Australian schools. Neither are there expansive playing fields, gardens, huge gyms, etc. There isn't room. (Above is the view from the classroom door at a school I visited last week.) One school I've been to here spanned about 15 floors down the side of the hill (lots of hills and mountains in Hong Kong), and most are at least 6-8 floors, with basketball courts on top of car parks or school buildings. But the kids adapt - one day I kept interrupting a very serious game of 'What's the time, Mr Wolf' and got frowned at!

All of my classes have wowed me with their willingness to write whatever I set them, whether it was an ususual poetry exercise or the beginning of a story. And lots of them were brave enough to read their work out, too! I hope they all keep writing and having fun with it.
Posted by Sherryl at Monday, November 22, 2010 2 comments

NaNo - Writing in the Cracks

I've surprised myself. I'm up to 21,000 words and still going with NaNoWriMo. I'm not even sure how! Maybe because this is a book that has been in my head for 2 years, and I'd already had one disastrous attempt at it in another form. I can sense that, as I write, I am padding enormously. Putting in heaps of description and character stuff - thoughts, dialogue, emotional reactions - that might well come out later or be trimmed. But isn't that the whole point of NaNo?

It is for me. It's the chance to break new ground, to get stuck into a whole new project or even (although I know it's kind of cheating) to finish that book-of-the-heart that you've never been able to before. About three years ago I used NaNo to rewrite a novel I've been working on for about 9 years. I didn't look at the old draft at all. I sat down and started it as if it was completely new. Lots of stuff came out that ultimately was really useful. That book is now on its way to being published. No, it's not a NaNo book as such, but NaNo helped me get a whole new perspective on what it could be.

I'm about to head off to Hong Kong. I have (by my calculations) about five days in which to write as many words as I can. After that, teaching and consultations take over and I am so brain-dead that writing is almost impossible. But I will keep trying. If I can get past 35,000 by Monday night next week, I might have a hope of snatching time and head space to finish the big 50.

Often that is what NaNo becomes - a frantic search for the cracks in your life. The 15 minutes or half an hour in which you can madly type (like I did in my lunch hour the other day), or that hour before bed when you firmly turn off the TV and write. If nothing else, I think NaNo teaches you that you can write anywhere, any time, if you really want to!
Posted by Sherryl at Wednesday, November 10, 2010 5 comments

I spent most of October trying to decide if I was going to do NaNo again this year (all right, not most, just a few moments every now and then!). That's the thing with NaNo - it's easy to build it up into this huge thing when the whole idea of it is to simply write. And write. And write. For the past five years, November for me has meant Hong Kong. I go there for two weeks or so, teach lots of writing classes, run training seminars and do school visits. It's pretty full-on, and although I try to write, by the end of the first week, I'm kind of short on headspace for writing.

So the question for me is: how many words could I write in two weeks? Can I get such a good head start on NaNo that I could coast the last two weeks? If you've ever done NaNo, you know the answer to that is nearly always NO. So I know from the outset that I'm unlikely to reach the 50,000 words. That would be enough to put off a lot of writers I know (the ones who stay up all night on the 29th to get to their 50 big ones).

But I see NaNo as an opportunity to launch into a whole new project. To obsess about it for at least 15 days, to get a huge amount of words written that I otherwise wouldn't manage. It's the focus of NaNo that works for me. When you have to write every single day, and write as much as you possibly can (no measured 1667 words a day for me), the story fills your head. You go to sleep thinking about it. You wake up thinking about it. This morning I woke up and thought about my story and realised I'd left out a crucial element in my first chapter. So today my first job is to go back and weave it in (that'll give me another 300 words or so!).

Are you doing NaNo this year? How are you going? Did you get off to a roaring start? Share your thoughts!
Posted by Sherryl at Tuesday, November 02, 2010 4 comments