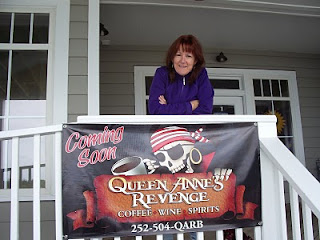 That's hatchet (small axe) - not Hachette, by the way. But it's what I'm faced with right now. My big historical pirate novel, Pirate X, is to be published by UQP next year. I've been working on this for around ten years (on and off) and I guess it's a lesson in perseverance. Originally it was 120,000 words, whittled down to 115,000. That was before I learned how to make huge cuts to plot, rather than just a few words here and there. Then I went to an SCBWI conference in LA, where the person who read my 40 pages for a manuscript consultation basically shredded it with no encouragement whatsoever. (Warning: Beware compulsive shredders. This person was not an editor or agent or publisher.)

That was enough to make me put the book away in my bottom drawer for a couple of years and try to move on. But it wouldn't let me go. I wrote other pirate stories in the meantime, which sold very well, and kept talking about this story during school visits. Because kids wanted to know how come I was so obsessed with pirates! So finally I was able to go back to the manuscript and start again, keeping in mind that despite a lot of positive responses from publishers originally, they all said it was too long!

Draft Number 7 was where the hatchet first came out. I ended up with 80,000 words, and something that was starting to get a lot more interest from publishers, but ... After eight years, and many many thousands of words in different drafts, I had a hard time standing back from it and seeing what else needed to happen with it. Funnily enough, that was when I started teaching a new subject called Story Structure. No longer could I just think about how structure worked, I had to teach it in a way that showed students what it was and how to apply it to their own novels and scripts.

Cut to June 2010. I had a contract for Pirate X. The manuscript had a deadline. And when I pulled out all my research and then looked for what new references were now available, I received a bit of a shock. One new reference in particular basically blew the first half of my novel out of the water! I checked - yes, this new information was solidly backed up. What should I do? Continue on my original path? Or take in the new research? When I pulled out the manuscript (draft 8) and read it, the way was clear. That version had a big, saggy, boring middle. If I was a bit bored reading it, what about everyone else?

Decisions were made. New material was noted, with timelines and dates and names. A new beginning was necessary. After nearly two weeks, I'm still only about 25% of the way through the hatchet job on this novel, and I'm not worrying at this point about either characterisation, setting or the quality of writing. It's all about plot and structure. About hacking and cutting and moving great chunks around (or deleting them). I hope that in about a week's time, I'll have a "rough cut" of the novel that I'll print out in order to see what I have. It'll be rough, it'll be jagged around the edges, it'll probably still be bleeding! But hopefully it'll be story with pacing and excitement and plot twists and tension, and then I'll fix the rest.
(By the way, Queen Anne's Revenge is the name of Blackbeard's ship which does feature in my novel. Unfortunately the cafe wasn't open the day we were in Beaufort, NC.)
Posted by Sherryl at Friday, July 02, 2010

It's so fascinating reading about PIRATE Xs journey to publication. Good luck with the final step of the process and can't wait to read it. Pirates are always in style :)

Gee, who took such a great photo of you there? 8-)

Karen - I've decided to write a mini-blog on the writing process. I've realised this weekend that I need to do a lot of background writing and planning, and I think this will help.

Kristi - must have been that wonderful travelling companion I had!

Sherryl, I have a book a bit like this- a fantasy, but still can't get it right- did some research in Victoria and Albert and hope I can apply it in the months to come- well done with perseverance!

It's hard to thread it all together, isn't it? Like an enormous tapestry, and sometimes you lose the sense of what the overall picture is!