Sydney and the CBCA Conference 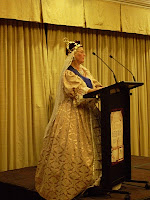 I've just spent five days in Sydney, with two highlights - a school visit to Avalon Public School, and the NSW Children's Book Council conference. It was a long but enjoyable bus ride to Avalon, with views out across the ocean and a great people-watching opportunity. The students asked excellent questions and I was welcomed by everyone.

The conference went for two days, and featured speakers such as Marcus Zusak, Bob Graha 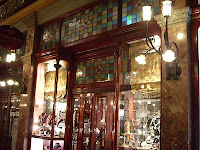 m, Glenda Millard, Ursula Dubosarsky, Tohby Riddle and James Roy. There was a bookshop that I tried to stay out of (without success) and lots of fellow writers to catch up with. The conference went well and everyone enjoyed it. I got to meet lots of teachers and librarians and talk about books.

On Friday evening, we were entertained by the launch of Jackie French and Bruce Whatley's new book about Queen Victoria's underpants - including a version of Queen Victoria (above) who did indeed show us her underpants! It was quite funny to visit the Queen Victoria Building the next afternoon and see the statue of the real queen out the front. I also wandered through the Strand Arcade, which was built in 1890, and took photos to add to my historical research of that time.

One of the most interesting sessions was a panel of four publishers talking about ebooks - when are they planning to release ebooks (most said now) and how will the marketplace change. It wasn't at all reassuring to hear them talk about how they think writers and illustrators might be paid, or how 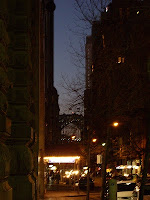 And after that session, on my walk along George Street, I ventured into the Mac store and watched about 20 different people playing with iPads, and not one person was reading a book. But also things are so up in the air at the moment, with so many possibilities and new options (and disputes looming), that I think it's impossible to predict where any of this might be in two years time.

So I'll keep writing, and instead of walking through the city, I'll be back walking in the bush - leaving skyscrapers behind and focusing on the tiny little cities that inhabit old, wet logs! 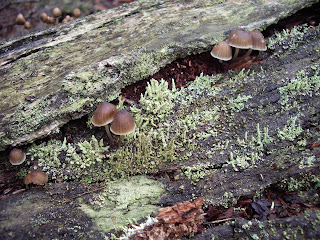 I feel I should post a sensible comment about the conference, but I've been completely distracted by the gorgeous pic at the bottom!

[Word verification: aphida. How did they know?}

I have a couple of dozen fungi photos to upload to my Bush blog - will try to do that tomorrow. I do go a bit berserk with them!

A great conference and well worth the trip. I particularly loved the launch of Jackie French and Bruce Whatley's book.