The Book Community Around You

Quite a few years ago, I presented a radio show on 3CR, a community radio station here in Melbourne. It was called Writers At Work, and it's still going, now hosted by Jan Goldsmith (Jan joined me in the last year or two I did the show, and then carried it on). Now there are quite a few community radio stations around, providing people with the opportunity to have their own show and share their interests and passions with others.

Last week, I sat on the other side of the panel and was interviewed by Denise Hughes (who is also a PWE student) on WynFM. Which was a lot of fun! Denise records the show and then Jacqui, who runs the Collins Bookshop in Werribee, creates YouTube videos out of them, using photos and book covers. I'd never thought of doing this before - the focus on YouTube seemed to be film. But Jacqui has done a great job, and her bookshop has its own "spot". The first part of the interview is here, and it's been uploaded in four parts, so you can just click on the next one to continue listening.

Also this week I have been organising celebrations for my two books that are coming out very soon. Som 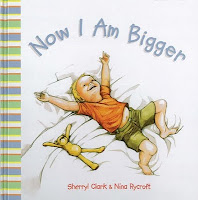 ehow they have both ended up being released on the same day - 28th June! But again, my local community have been really helpful. Now I Am Bigger is being launched at Story Time at my local library, and One Perfect Pirouette will be launched at the Sun Bookshop in Yarraville. Dates and times announced here soon! Also, a friend of mine has a stepson who happens to be a terrific graphic designer and has his own business, Juncture Creative, so he's been doing invitations and bookmarks for me.

In the drive to be on the bestseller lists (a nice dream...) or even just to get a bunch of great reviews for your new book, it's easy to forget the support and encouragement that's all around us. Thanks, everyone!
Posted by Sherryl at Tuesday, June 15, 2010