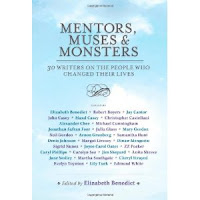 This week I've been reading a very interesting book of essays, lent to me by my friend, T. There are some great experiences between these covers - yesterday I read about a woman whose mentor/monster was Susan Sontag. It can be a crucial turning point in a writer's life, to have the kind of mentor who changes your writing, your way of regarding the life of writing, and how you put words down on the page. Mentorships have been gaining in popularity here over the past few years. First the Australian Society of Authors offered them, then the Victorian Writers' Centre. I read some of the early reports from the ASA scheme, and those being mentored talked of having someone experienced to simply engage with and bounce off. No manuscript editing was involved (a common perception of a mentorship - like having a personal editor).

One of my favourite essays was by Alexander Chee, whose 'mentor' was Annie Dillard. He uses the term loosely, as she was a teacher who had a great influence on him. What I found interesting was that, like many others writing for this collection, he didn't really understand her influence until later. I loved the line: "In that first class, she wore the pearls and a tab collar peeped over her sweater, but she looked as if she would punch you if you didn't behave." When told they had to hand in their drafts triple-spaced and questioned it, she replied, "I need the room to scribble notes in between your sentences."

Other contributors talk about famous writers as mentors who barely talked to them about their writing but nevertheless inspired them in some way. Joyce Carol Oates, as I imagine many writers would, talks about several different people who influenced her - The Rival, The Friend, and the early influences of particular books. Julia Glass talks of finding an editor who becomes a lifelong friend, mentor, muse and confidant, as well as editor of her novels. Elizabeth Benedict describes her relationship with Elizabeth Hardwick, as do several other writers in the book. Hardwick was a teacher at Columbia and seemed to have had an effect on many of her students, both positive and negative.

As well as finding this collection quite inspiring, it's also making me curious about the novels the various contributors have written. Alexander Chee appears to only have one novel published so far that is still in print; Mary Gordon has four or five. Without spending lots of dollars, I'd like to track down their work and read it. On the other hand, Jonathan Safran Foer's insistence on calling his early romances with girls attempts to "mate" sounded so weird that it coloured the whole essay for me! And set me thinking about another blog I'd read recently where a writer's performance at an event had put that person off his books forever.

This writing life can be so tenuous at times. And it's clear from this book that new writers can be so easily influenced by the literary and/or famous. While the ASA mentorships sounded helpful, I've heard of others where a new writer has been influenced by their mentor to change and rewrite crucial parts of their novels, damaging both plot and an original, vital voice. Is this the mentor's role? To me, this is the danger. One writing teacher here in Melbourne is notorious for creating whole classes of students who come out at the end of the year sounding just like him. How can this be a good thing?

Yes, it's easy to be influenced. What female poet (including me!) hasn't gone through a stage of sounding like Sylvia Plath? But if you read widely, and read as a writer, you move through it and past it, and your writing and your own voice grows and strengthens. What it takes is practice, weeks and months and years of reading and writing LOTS. Not just one piece, or one style, or even one genre. We have so much to draw on these days - it's like an incredible banquet. If all you do is stick with the chicken wings, you won't get far.
Posted by Sherryl at Sunday, May 30, 2010