The Best Part of Research 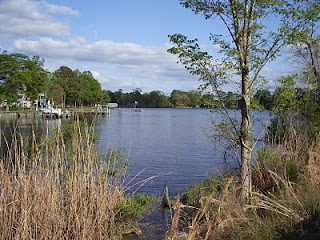 There is nothing quite like writing about a distant place through many drafts of a novel, imagining how it might have looked 300 years ago, placing your characters there and having them walk, listen, watch and engage - and then getting to go there yourself. I have just returned from a trip to the U.S. where the first week was a conference, but the second week was all about on-the-ground research for my big historical novel, Pirate X (due out August 2011).
One of the first places my character, Will, goes to is Bath in North Carolina. It's up the Pimlico River, and it situated between Bath Creek and Back Creek (photo of Back Creek above).

In my head, I imagined there to be hills and forests around Bath. The only illustrations I have found have been of streets and houses. So when I finally drove into Bath last week, I was a bit astonished to find it's flat! No wonder they chose this place as the first capital of North Carolina. It was on water deep enough to dock largish ships, and there was plenty of room for houses and taverns, as well as a forest of pines that they harvested for turpentine and pitch. We spent most of the afternoon there, going through the four old houses and churches still standing, while I imagined Will walking along the creek and hearing the sound of wood chopping and sawing. Fantastic! 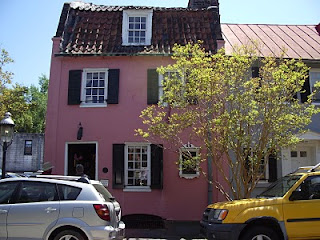 Earlier in the week, I had been in Charleston, South Carolina, and the pirate and dungeon walking tour I went on was terrific. Thanks to a great tour guide who answered all my questions and gave me some extra information for my novel. (No thanks to the guy who was our guide on the ghost tour that night - he was so bad that it's a wonder someone didn't leap out of their grave and thump him!) The Pink House above - literally called that - was one of the first taverns in Charleston, frequented by pirates in my era (1718) and well-preserved. 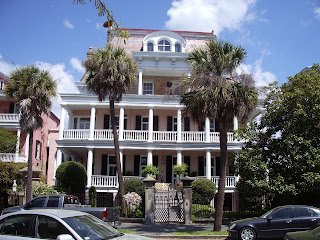 I think I took more photos of houses in Charleston than anything else. They were so amazing, and I would have loved to go through them all. The mansion above is one of many similar on the Battery and East Bay Street. I did visit the Rhett-Aitken House, which was fascinating, and reminded me a little of Ripponlea here in Melbourne. 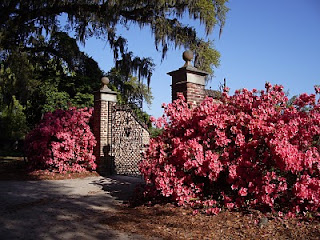 South Carolina was full of blooming azaleas everywhere we went. These glorious bushes are at the entrance to the Boone Hall Plantation near Charleston (there is some great video footage on their website that will show you some of what we saw).

I made this research road trip with my friend, Kristi Holl (her blog on the trip is here) who was researching the Civil War, so I got to learn about that, too, including seeing an original field hospital at the Bentonville Battleground. I think we both went home with our heads full of the 18th and 19th century, totally re-inspired to start work again on our novels. What a way to write!
Posted by Sherryl at Tuesday, April 20, 2010

How wonderful to be able to walk the pages of your novel.

I will never forget that trip! Awesome scenery, awesome food, and hours of conversation with the lowest maintenance person I ever traveled with. I'm already thinking, "Where could we go next?"
8-)

The photos and the memories are sustaining me this week while I battle with horrible things like BAS returns and marking assignments.

It gives me a lift to look at the photos again!