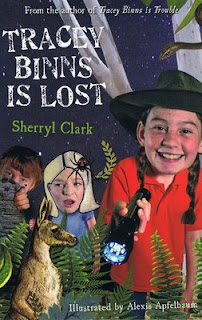 Tracey Binns is lost in the bush and the last people she wants to be stuck with are Justin Zit-face and her annoying teacher, Mr Gunning.

Tracey's school has started a new healthy-eating and exercise program and the kids are not happy. They're even less happy when Mr Gunning, their dreaded PE teacher, announces that he is taking the Grade Six students on a bush survival and fitness camp.Facing the pitch dark and the strange calls of the wild is not Tracey's idea of fun. But all this looks like a walk in the park when they become lost on a long day's march ...Tracey Binns is in trouble again!

This week I'm celebrating the release of my new Tracey Binns novel (for 9-13 year olds). Tracey is one of those characters who won't go away. She leapt into life one day - I'm still not sure where she came from, but she was noisy and determined, and she got my attention fast! She's the kind of character you can't help asking that vital question about - why? Why does Tracey behave the way she does? What motivates her? I have a lot of fun getting behind Tracey's facade and ferreting out what's really going on with her.

And sometimes not only do the other characters surprise her, she surprises herself. I've also had fun "helping her" to create her own website. This is not the week for camping - way too cold - but when I went up to Benalla to research locations for Tracey's school camp, it was pretty cold then, too. Every bit helps, when it comes to imagining Tracey in her world.
Link to fishpond.com.au:
Tracey Binns is Lost
Posted by Sherryl at Friday, May 08, 2009

Sherryl, that's so exciting! Congratulations! I LOVED the first Tracey novel, so I really look forward to reading this one. She's such a feisty character, yet has a lovely prickly warmth to her too. And Alexis' illustrations are are so spot on with your humor. You must be thrilled!

Thanks, Katherine. She's a great character to write. Maybe there will even be a third one? Fingers crossed that this one sells well!