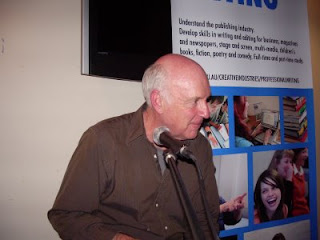 This week I had the privilege of interviewing John Clarke, one of Australia and New Zealand's top comedy writers. TV viewers here probably know John best through 20 years of appearances with Brian Dawe, doing short "skits" that comment on news topics. There are lots of these on YouTube, if you're interested. What you will also find on YouTube is a range of John's other performances, starting with Fred Dagg and including a wonderful portrayal of a used car salesman.

I spent about two weeks preparing for the interview. I knew it would be in front of a live audience of at least 120 people, and I knew I'd probably have to be on my toes with JC. I went for long walks and wrangled questions along the way, I researched him via his website and other avenues, I watched a lot of YouTube, and I listened to a 30-year-old cassette I own - Fred Dagg Live. I came up with a list of 19 questions, many of which focused on writing and script editing, as a lot of our professional writing students were going to attend. 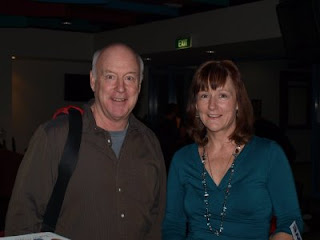 Well, I had the best time ever! Yes, I was nervous beforehand, but John and I had a bit of a chat first, and then we went on stage. I introduced him and he immediately broke the ice with a joke. From then on, it was plain sailing. My questions were often answered with long anecdotes that had everyone in fits of laughter, but he shared many thoughts and experiences that had the audience silent and thinking. The 45 minute interview went for well over an hour, then after the break, he answered audience questions. I got the feeling everyone would have stayed all night!

Thanks, John. You're a generous, funny man. And I hope that school principal in Palmerston North is still shaking in his shoes!

Well, all I can say is you looked like the seasoned professional -- like someone who had been interviewing for twenty years.

And what a generous man he is to have stayed on and listened to our student readings! Not often you see that. I've always admired him as a writer and performer, but my respect for him has gone through the roof!

John Clarke is a fantastic bloke. I grew up listening to old Fred Dag recordings and watching The Games, which I adored, but I didn't know until comparatively recently that my dad used to work with him at the ABC. Since then, I've spoken to him on the phone a couple of times, and he's always been wonderfully dry and lovely to talk to. Interviewing him must've been great!

The interview went really well, simply because he is such a great talker, relaxed and willing to share experiences and stories.
I'm still finding myself remembering snippets a week or more later.