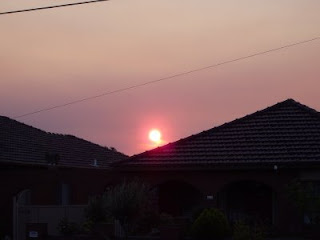 Last night, we were watching TV and our front door was open. Suddenly I noticed this large bright red rectangle on the wall inside the house. It was the setting sun, casting a bright red glow over everything. This is the best my camera could do to capture it before it went down.
Meteorologists say that when there is so much smoke in the air, light naturally filters through and as red is the "strongest" in the spectrum, this is what we see. An eerie reminder of one week ago.

Today we drove north of Melbourne (not near the fire areas, unlike some people who apparently are treating it like a tourist attraction!) and encountered quite a bit of smoke haze. It disappeared later when the wind changed yet again. I wonder how many of us are numbed now by the relentless media coverage. It has been amazing, overwhelming and confronting - and has certainly led to a huge outpouring of welcome donations. But are we nearing saturation point? According to some newspaper reporters, the survivors certainly are. Many are now refusing to be news fodder, and want to be left alone.

I remember seeing a show last August (by accident) - Ellen de Generes, who has done a huge amount of fundraising for New Orleans and its rebuilding. The show I saw was about reminding everyone that it is still a disaster area, that people are still fighting every day to rebuild, and that long after the media has been and gone, the city is still nowhere near getting back to finding out what normal is. Will this be what it's like for our bushfire survivors in a year's time? Fighting to get the funds that were raised for them? Fighting to regain some semblance of a normal life again? Media spotlights come and go. It's what we do to help after they pass that counts.
Posted by Sherryl at Sunday, February 15, 2009

You're so right, Sherryl. It's so easy to forget about a disaster area once it passes from media attention. I think it's true on a smaller, personal level too. We swarm around someone in the hospital after an accident, but few are still there to encourage during a year's rehab or job change or even to help with laundry and child care for the necessary months. Time is a big factor, I bet (or lack thereof).