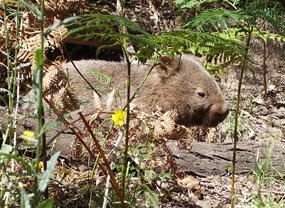 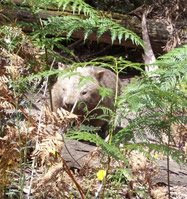 This has nothing to do with books! Apart from the fact that I have written two wombat stories (unpublished) and included a wombat in the new Tracey Binns story, due out next May. I have a "thing" about wombats. Have had for years, long before Jackie French made them famous with her picture book, and there have been other picture books about them too. But in the six-and-a-half years we have owned some bushland north of Melbourne, I have never seen a wombat there, despite mountains of wombat poo, and many scratchings and holes everywhere. (I don't count the one in the distance on the hill because I didn't have my glasses on!)

Yesterday, I finally got my wish. I went for a long walk, and decided to venture up the other side of the dry creek for a change. I walked along an animal track (usually made by kangaroos or wombats or both) and followed it down to the creek bed where I scared a little swamp wallaby into madly hopping away. I stopped for a moment to pull grass seeds out of my sock, headed back and heard more thumping. Another wallaby? I froze. Waited. Looked. And there was a wombat, not twelve feet away.

It's unusual to see them out in daylight. They usually come out at dusk to graze for food. I think I caught this one unawares. It froze too, waiting. I edged around to get a better view through the bracken. It sniffed the air. Luckily, the breeze was blowing towards me. I took lots of photos, and waited, finally sat on the ground. Watching and marvelling. The wombat scratched some fleas, sniffed around, couldn't seem to decide what to do, but as I was being as quiet as I could, it stayed.

Then a small branch fell from a nearby gum tree, and it bolted down its hole, which was just three feet away. I heard its feet thumping as it escaped underground, probably hoping I'd just go away and leave it alone. Which I did. Feeling very lucky and very special. And hoping among all my photos that at least one would do the experience justice. I'm happy!
Posted by Sherryl at Saturday, December 27, 2008