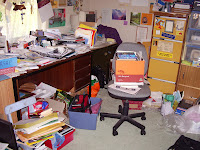 Early in 2007, I signed up for a series of teleseminars run by Randy Ingermanson and Alison Bottke called Clean Up Your Act. Originally, it was Lecture #1 that interested me - how to de-clutter your office. Did I ever need that! But in the end, the office went on as usual, I kept stepping over and around things and writing on the kitchen table, and my focus shifted to the strategic planning part of the seminar series. It was very helpful and made quite a difference to how I approached and planned things.

But ... the office. Eighteen months later, it's worse. And to make things even worser (Craig said I could use that word), I have a room out in my backyard that is also full of all sorts of stuff. Some furniture, some of my daughter's things, but mostly mine. Boxes of magazines, boxes of papers, old files, research materials, books, old clothes, old computer bits - you get the picture. Where on earth was I to start? In fact, that's really what's stopped me from making any headway with it. Every time I looked at how much there was, I felt like crying, and had no idea where to start.

Well, I finally worked out that starting point. It's a shelf. Any shelf. One shelf at a time. Doesn't matter which one - they're all bad news! And the floor. I had to clear at least half of the floor before I could start on a shelf, because otherwise there was nowhere to put the stuff on the shelf I wanted to keep, or the garbage bag. On the other hand, it doesn't pay to clear too much of the floor because that's a big incentive to keep more of what I should be throwing out.

So, in true Craig Harper style, I'm making myself accountable. To everyone who reads this. I'm posting a photo of my office, and I'm admitting that it got worse after I took this photo, so you really understand how desperate I was beginning to feel! But this time, with a Christmas and New Year break coming up, I have no excuse. I'll have time to spend at least an hour every day on this until I have conquered it. We've cut right down on gifts this year, so I won't be adding a whole pile of new stuff either. This is not a resolution thing, it's simply a commitment to making my life easier, and better for writing.
Posted by Sherryl at Saturday, December 20, 2008

Hoorah! Someone who is at least as messy, if not messier, than me. Oh - but you have bright sunshine outside your window, whilst here in London it's been the shortest day of the year (it got dark around four).

Aha! Wait until I finish and post a photo of the wonderfully clean and tidy office.
Dark at 4pm? But do you have an open fire? Or a pretend gas one, to lounge around?

Haha - my fire place - actually a rather grand affair - is a storage area for books, half finished kids pictures, you name it...

Look forward to the inspirational clean and tidy pic.

Good luck with that! I'm starting to pack for my move. Not sure where. Not sure when. But one thing at a time. And packing's like tidying up --- you've got to be disciplined and ditch anything you don't want.

I'm putting stuff in see-through tote bins, so I'll know where everything is. Expensive? Yes. Obsessive? Possibly. But very handy.