What's Different About This Story? 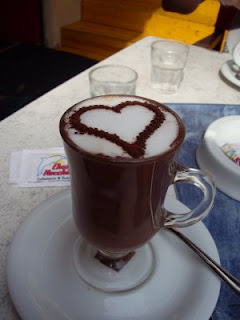 I won't go into all the gushing descriptions again about the hot chocolate I had at the Cafe Francais in Place de Bastille in Paris. Suffice to say, I doubt Angeline's could've done much better. This lovely cup of chocolate above, although it looks amazing (and the inside of the glass was coated in chocolate that melted as I drank it), still came third in my list of great chocolate in France. Second was in a small cafe/bar in Gruissan.

My point is: isn't chocolate just chocolate? Aren't they all made from the same ingredients? True, but to me chocolate becomes a metaphor for stories. Aren't all stories the same? Aren't there all these writing books that say there are only seven/twenty/thirty-six plots, and every story uses the same ones? The obvious answer is that chocolate (in a cup or in a packet) does differ enormously, depending on the quality of ingredients and their mix, just like the quality of a story differs depending on the skills of the writer.

I would take it one step further. It's also about how the writer sees their story and their characters, and how aware they are of the possibilities, as well as what has already been done. Does the chef at Cafe Francais know about Angeline's chocolate? How could s/he not, given the publicity 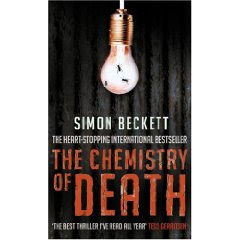 and word-of-mouth it gets? Did the chef set out to better Angeline's? And having very likely succeeded perhaps (especially on price), why aren't they publicising theirs more widely? Perhaps the chef went to Angeline's and said "I can do better". Perhaps not.

As writers, one of our key "jobs" is to read - we need to know what has already been done (and done to death) in our genre or area. We need to read with an eye to working out how that story worked and why it was different. And then we need to come up with a story and characters that stand out from the crowd. Yes, there are many similar stories, but it's how you approach it that counts. And if you do so armed with the knowledge of what to avoid, you'll be better off.

Which brings me to Simon Beckett. I love discovering a new writer - as my friend K says, then you hope they've already written twenty books so you can have a wonderful time reading them all. Beckett only has two to his credit so far but they are great. His main character is a forensic anthropologist. Sound familiar? Like Kathy Reichs? Ah yes, but Beckett has done something different with the FA genre, mainly with character and great setting. I recommend both of his books - The Chemistry of Death and Written in Bone.
Posted by Sherryl at Thursday, October 09, 2008