The Littlest Pirate Sails On 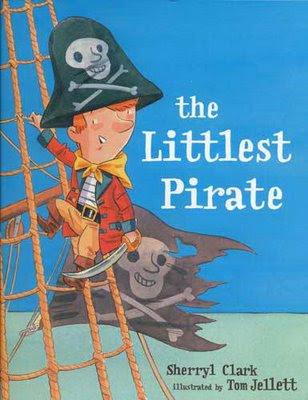 Way back in 1998 or so, I was writing a large historical novel about pirates. I'd done hours and hours of research and I was halfway through what would eventually be 120,000 words. I needed a break. So I decided to put the novel aside and write something completely different. Maybe fairies or animals or something ... What came out was a story called The Littlest Pirate. Originally I thought it was a picture book, but Penguin accepted it and published it as an Aussie Nibble (after I added some more words).

Now, ironically, The Littlest Pirate has just been published here in Australia as - you guessed it - a picture book (cover above). The editor and I trimmed and tidied, and the illustrator, Tom Jellett, created Nicholas Nosh's story in full colour. It looks fantastic! Dare I say - it's on sale now, perfect for Christmas gifts. $19.95.
The one thing I have learned from Nicholas's voyages around the world is this - you just never know where a book might go, or what might happen to it. Next time you want to sign a contract for your new (or first) book without carefully considering the terms or getting advice, think again. Like I said, you just never know...
Posted by Sherryl at Wednesday, October 22, 2008

Hi Sherryl
Congratulations on the Littlest Pirate. It must be extremely rewarding to see this published in the format you originally intended. I think pirates and preschoolers go 'hand in hand'. I'm sure it will do well.
Sue

My grandson and my critique group love your picture book version! (I do, too, of course.) What a story--and a good lesson here about what you sign in your contract.