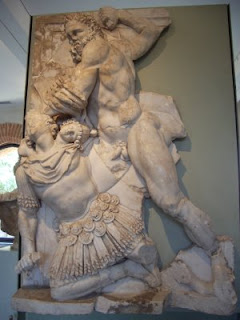 I only had one day in Toulouse, but found two museums of interest (and lots of nice shops). The first museum focused on very early Toulouse, with a lot of Roman remains and history. It's interesting to see how a city can be built on a city that was built on a city, etc. Many of the artifacts in this museum were discovered when they were digging out a new underground metro station. Romans settled and lived and built in Toulouse from about 100BC to 450AD, when the Visigoths and Vandals invaded.

Given that the Visigoths and Vandals were on the move from the Germanic areas, pushed out by other invaders, I thought it was quite astonishing that the Romans were overcome, given that they were solid fighters and had built virtual fortresses. But maybe complacency had crept in? The other astonishing fact I learned at this museum, thanks to a helpful guide, was that the Romans invented concrete. The other thing I saw was the Via Domitia, the original Roman road - in a big square in Toulouse, part of the original road is exposed underneath. I expected it to be smooth (for horses and carriages) but it was pretty rough and rocky. 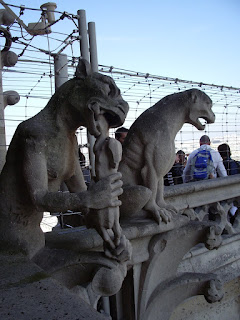 Of course, on my last day in Paris, I had to make up for missing Notre Dame, thanks to the Pope. My mountain climbing in Languedoc, to look at Cathar castles, was good training for the 387 steps right to the top of the North Tower. The bell started ringing on the way up - some people behind me seemed to think it was their death knell as they struggled ever upwards! I must have about 20 photos of gargoyles from different cathedrals and churches around France, but this one on the top of Notre Dame has to win the prize for being the most gross.

Inside the cathedral, the morning mass was taking place. Several hundred people sat in the middle section and tried to listen, while many hundreds more wandered in and out, took photos, talked, took more photos... They must be used to it, I guess.
And finally, I have to agree with the various websites that rate airports. Charles de Gaulle airport in Paris is truly terrible. And airlines like BA that provide eight staff to help people do e-check ins, and two at the bag drop make it more abysmal.
But I am home again, feeling like I could sleep for a week, and sorting through my 561 photos.
Posted by Sherryl at Thursday, October 02, 2008

Welcome home! Are you able to sleep for a week? Or do you have to go back to ... no, I can't bring myself to type it.

I can't wait to see more photos, Sherryl, after you get rested up and make your banana bread. 8-) The photos of castles would be most appreciated! We have our tickets now for May--so it's set! So glad you made it home safely. Please take all the time you need to recupe!

It's OK, Snail, I have another few weeks before I have to go ... there.

Kristi - you will have a fabulous time. I think reading all the travel guides and planning what to do before you go is half the fun!