Writing at the Coast 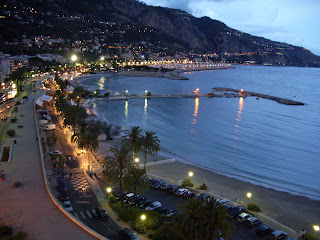 With a view like this from the window as I type, there really is no excuse for not feeling inspired, is there? Except there is so much to see and do and wonder over... and eat, of course. I am in Menton, right near the Italian border, and the weather is lovely. We are in an apartment high above the bay, but in the old quarter, so that to get to where we are staying, we climb up through a dark, narrow passageway of many steps, then a little way up our winding street, then through an iron gate and up four flights of stone steps that have felt probably millions of feet over the centuries.

So I am inspired, and have written more in my journal, and a new poem, and today I went to Nice and saw some Roman ruins that gave me more ideas. It's all about feeding the creativity, in many different ways, right down to the elderly men playing boules in the park who tried to persuade me to throw a few boules with them (I said no, thinking they probably couldn't move fast enough to get out of the way of my missiles!). 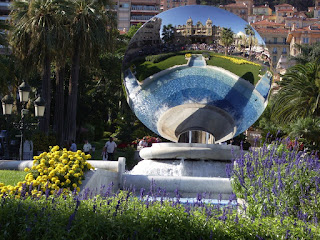 This is someone else's inspiration - an installation, for want of a better word, outside the Monte Carlo casino in Monaco. It's a huge shiny mirror (convex? or concave?) that shows both the fountain below it as well as the entrance to the casino. In front of the casino, where I managed to lose E10 on the poker machines, just so I could say I'd been there, you might be able to see a lot of tourists, but also a Bentley and an Aston Martin and a Lamborghini. None of which belonged to me. 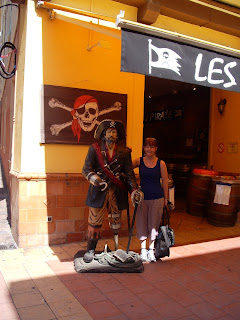 Naturally, wherever I go I will find a pirate if there is one to be found. This handsome buccaneer stands outside the Pirate Lolly Shop in Menton, and very kindly allowed me to have my photo taken next to him without demanding any gold. Mind you, as he is a statue, he would've had a hard time getting his hand up to grab my money anyway.
Posted by Sherryl at Wednesday, September 17, 2008

Don't forget that Friday is Talk like a Pirate Day --- so there's another excuse to visit the shop.

Sherryl, thanks for more photos! Your creativity reservoir must be getting fairly full! Sounds like you're getting plenty of exercise as you sightsee--and just getting up to your apartment. I am truly inspired by your trip--and excited to plan my own!
Kristi Holl
Writer's First Aid blog