The Joys of Research 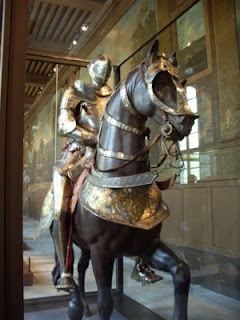 Now if you were writing a fantasy novel, how could you not be thrilled by room after room of arms and armour from 13th - 16th century? It's not my main genre (think pirates and muskets and pistols and swords), and this period is 700 or so years after the one I am researching while here, but it all feeds in somehow. And I kept thinking about my friend T, and taking photos so I could give them to her and say, "See? Look at all this iron and steel and stuff!" All of this, by the way, was in the Musee de L'Armee at the Hotel des Invalides (military museum going back to the 13th century). Some of my favourite things were the knight's armour with the little hooks and holders on the side (a bit like big cup hooks) that you rested your lance on, and the suits of armour made child-size. Got a kid who's a bit overly-energetic? Throw some armour on him and send him off to war!

I was also fascinated by the pistols and muskets from the 1600s. They did some serious experimenting with ratchets and wheels and hammers and levers, in order to create firearms that were more reliable and accurate. Of course, when you were relying on gunpowder and a spark, reliability was never guaranteed. I also found the crossbows to be incredibly lethal-looking - you'd have a hard time recovering from one of those arrows. OK, I will move on from my medieval weapons moment! 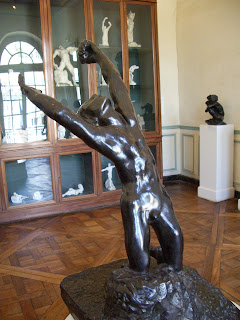 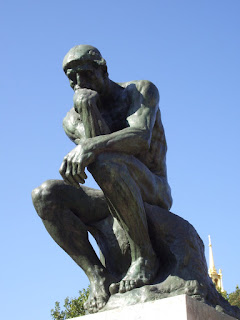 I can't remember when I became a Rodin "fan". Fan seems a paltry word. It was either late in high school or early in my years as a trainee librarian, let loose amongst a library full of books. Both The Thinker (above) and The Kiss (of course, I was a teenager) expressed everything to me, through bronze and marble. Today I visited the Musee Rodin, and could hardly believe I was seeing the original sculptures, as well as their early studies. It's a very strange feeling, to have almost idolised a collection of works of art for such a long time, and then finally get to see them for real. The passion and eloquence in his sculptures, and their effect on me, has not at all been diminished by seeing them today. And in this age of cynicism and "what's next" tourism, that is a wonderful thing.

Posted by Sherryl at Wednesday, September 10, 2008

I can only imagine the magic you feel when you see the real deal (as opposed to photos of sculptures). It sounds like everything is living up to your expectations! The top photo reminds me of being at the Tower of London--fabulous displays of armor. Until then, I hadn't even known the horses had armor too. You've inspired me. Today I finally made a concrete move to plan for my overseas trip.
Kristi Holl
Writer's First Aid