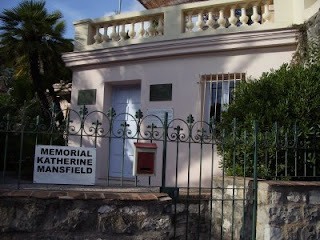 One of the reasons I came to Menton was because this was where Katherine Mansfield, the New Zealand writer, lived and wrote for some years. On the street map Avenue de Katherine Mansfield looks big and important, but when I trekked up there, it was not so. The avenue was a small hilly street that quickly turned into what was more like a driveway, and then actually became someone's driveway! But I did find the house where she lived, and this is the memorial. Two plaques, one which is about her birth and death dates and a quote from a letter to Middleton Murray.

The other plaque lists the books she wrote while living there. Of course, I wanted more. But this is all there is. And in the neighbouring street, Rue Webb-Ellis, there is no statue of Webb-Ellis that I could find, just a train station. Webb-Ellis, by the way, is credited with "inventing" the game of rugby union (go All Blacks!). Despite these two minimal tributes, which were the initial inspiration for coming here, I love Menton and can recommend it to anyone at all for a visit. 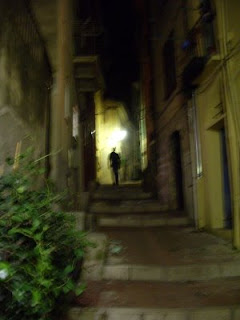 On the one hand, this is an awful photo - out of focus and hard to discern. On the other, I love it. On the way home from dinner last night, on impulse we decided to follow some stairs up from our street and see where they led. It turned into a fascinating journey through a labyrinth of steps, archways, twists and turns, unexpected doorways and more steps, and finally the church at the top. In the dark, despite some lighting along the way, I felt that sense of life in much earlier times, when narrow pathways and tall houses with barred windows were the essence of the village. Mysterious, evocative and entrancing.

I can't tell you how much I've enjoyed your travelogue from France. I also love going to places where I can sense times past. I recall being the only one in an English abbey and old castle once. It took me back about 800 years! Thanks for sharing your trip.
Kristi Holl
Writer's First Aid blog

Just wanted to let you know aboout a newly formed International Trust, Katherine Mansfield Society. Many amongst us have made KM Pilmgrimages, including to Menton. Please visit us on oour facebook page or at www.katherinemansfieldsociety.org