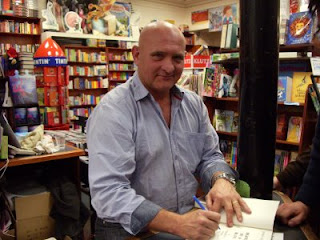 This is a photo of a happy author, celebrating the launch of his book along with a big bunch of mates and supporters. Dennis McIntosh. The book? Beaten By a Blow: the story of a shearer. It's a great moment for any author, to have your first book out there, on the shelves, receiving lots of attention and good reviews. And this is one guy who totally deserves all the good things that come with being published at last. Not that Dennis's path to publication is all about the book, or even all about the writing. It's about guts and determination and - that key factor - perseverance.

Beaten By a Blow is a title that rings of the shearing sheds, but couldn't be further from describing Dennis. I first met him back in 1996. He was in my poetry class, and it was obvious from the first night that he had a voice and a story to tell. At that time, he was struggling with grammar and punctuation, and poetry gave him a playing field of language that allowed him to express what he wanted to without being obsessed by the comma (that came later!). He produced two collections of his own poems, and had a poem read out in parliament.

Dennis tells me that, at the time, I said to him, 'You should go to university.' Well, he did. He started with my poetry class, and went on to do a Bachelor of Arts at Victoria University, an Honours year, and then a Masters at the University of Melbourne. He jokes about the fact that his thesis, written in academic language (after another long struggle), was about how he couldn't use academic language the way they wanted him to! He was determined to master grammar and punctuation, understanding that without those skills, he was always going to lag behind in writing for publication of any kind. So he studied editing with us at Vic Uni TAFE, TWICE!

Along the way, Dennis has fought a huge bunch of non-believers, people who decided they knew what was publishable writing and what wasn't, and told him several times to give up. Said he'd never make it. That's what I mean by perseverance. Not just writing and writing and then rewriting, but studying grammar, studying literature in order to understand what it was he was trying to do, and then not listening to the non-believers. I don't believe anyone has the right to tell a person they should give up on their dream.

Now Dennis's first book is out there. It was originally conceived as a novel, but his editor at Penguin convinced him to rewrite it as a memoir, which was a good move. Dennis said at his launch that the support from the editors at Penguin was fantastic, and he rose to their expectations, wanting to make it the best book it could possibly be. I wish you every success, Dennis. You are an inspiration.

And here's the blurb:

Dennis McIntosh was always determined not to get stuck in a factory like his father, but it's only once he takes a job as a roustabout that he discovers what he really wants to be: a shearer. Travelling from station to station, he revels in the smell and feel of the sheds, and the freedom of being answerable to no man except his mates.

And it's a thrilling tme to be in this legendary occupation. There's a fight on: the union is defending its workers against scab labourers' use of the wide comb. But while shearing's a fine life for a nineteen-year-old, it's a hard one for a man. As the added weight og adulthood settles on Dennis's shoulders, the sheds take their unforgiving toll.

Beaten by a Blow shows us the reality behind the romance of the shearer. Most of all, it tells the story of a boy dull of hope crashing headlong into life - into work, into drink, into responsibilities he isn't ready for, which come closer to breaking his back than shearing ever did.

From the blurb, this sounds like a grabber! I love the story of inspiration + perspiration (and not listening to those who don't believe in your dream.) Congratulations to Dennis!

Great post. I've just done mine but rather than rehash what you had to say, seeing you did it so eloquently, I put up my speech, and linked to yours.