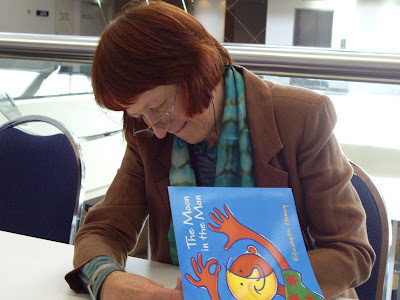 This is the wonderful Liz Honey, signing one of her books after our poetry session. Talking to people now about the conference, a week later, means I am remembering more of the highlights and things that stuck in my brain. Such as the way that, as the conference went on, more and more people started to say how sick of the word literacy they were. How often it was used an excuse for doing stupid stuff like testing (instead of helping kids to enjoy reading), how so many "experts" used it as a topic to beat their chests about and make a noise while contributing little of value. How it is used as a big stick to threaten schools and teachers. So inevitably the suggestion came that we ban the word and go back to talking about literature. I'll say yes to that.

There was an inevitable small stoush over the CBCA shortlists being elitist, and how any "popular" book that made it to a shortlist was a token gesture (to whom, I wonder). The other main point of disagreement was over what some called "trashy" books, suggesting they should be banned or children actively dissuaded from reading them. One would have to ask why. Reading is reading is reading, isn't it? I'm often amazed at those who do studies on reading and forget to include things like websites, comics and nonfiction books, focusing only on fiction. Lots of people don't read fiction, but they do read. And then of course there are people like me (and I have discovered some of my students!) who will read anything, even the back of the cereal box at breakfast.

There were lots of book launches, not just mine, and piles and piles of new books in the Trade Fair. The Fair is definitely freebie time, and I came home with several new books that were being handed out like those food samples at the supermarket. I avoid the food and love the books. (I also have to celebrate winning a door prize at the Saturday night dinner and - lo and behold - the prize was books. Yaayy!)

One interesting panel session was about the survival of picture books. Ann James would have to be one of our best illustrators in Australia, yet she said although she is doing better work now than ten years ago, she is earning less, due mostly to deep discounting practices, where a creator can end up being paid five cents per book for deep discount sales because those royalties are not based on RRP. Five cents compared to $1.30? Tell us about it! Unfortunately, the guy from ASO, where a lot of those dd sales often go, said he had no idea that was the case. I say unfortunately because after the session several people said they had heard him speak before and he certainly did know that was the case. Logically, how could you not?

One issue that did come up in informal delegate discussions quite a few times was the cost to attend the conference. I knew several people who couldn't afford to go, even for one day, although the keynote speaker talks were open to the public for $25 each. However, if you wanted to attend the whole thing, you were looking at around $700. Not a problem if your school or library pays for you, but out of range for most others who were genuinely interested. Who do we want to attend these conferences? Obviously teachers and librarians from schools and public libraries, and other professionals in the children's book arena. Does the CBCA want new authors there? What about those interested in books simply because they love reading and maybe have kids? It's an ongoing problem - obviously they have to cover costs, and venues now are expensive, as is catering and organising. It is something to think about before the next one.
Posted by Sherryl at Saturday, May 10, 2008

Gawd, and I thought I was the only one who read the back of the cereal packet ... ;0)

Just wanted to say I agree with your comments re: price and conference attendees. I'm a 'beginner' writer and totally self-funded. Add in interstate airfares and accomodation and it's an expensive 3 days. BUT - I'm hoping it is an investment in my future:) Another delegate I was talking to was a mum just interested in children's books. How fabulous that she was able to come, because that's where reading starts, isn't it? At home.

That's amazing that someone came because they want their kids to read - did she attend the whole conference, or the public sessions only? Hope she went home with lots of freebies!