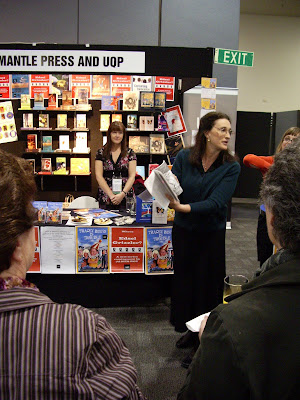 Where to start? Some terrific keynote speakers were the highlight for me. Shaun Tan (below) spoke about his life as an artist and illustrator and used an amazing array of images. This one is from his book The Lost Thing. He also showed his drawings from his first day and second day of school, and one of a T Rex from when he was seven - absolutely gobsmackingly good! 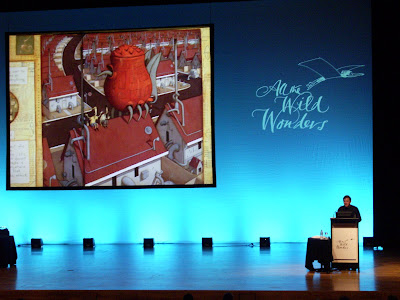 Another great speaker was Neil Gaiman. His session was one that was open to the general public, who swelled audience numbers by a hundred or more. He included poems based on fairy tales in his talk, and said some very interesting things about the craft of writing and ideas that come from 'what if'. Emily Rodda was also good, and made us laugh.

My favourite speaker of all, though, was Bernard Beckett from New Zealand. Text launched his book Genesis and Bernard spoke for about five minutes. I could have listened to him for another hour or more. He was very genuine and passionate, and kept everyone entranced. I have bought a copy of his book, which was recently optioned for a movie. The guy from Text made a point of saying how they were actively looking right now for great YA novels (got one in your bottom drawer? it has to be really good!)

The top photo is of Elizabeth Fensham launching my book Tracey Binns is Trouble. She said some lovely things about the book and read some bits from it. The launch was in the trade fair so it was very noisy, but we gathered a small crowd. (Yes, that's me hovering in the background.) I was pleased to be able to get Tracey's website up before the conference, and it was a lot of fun. Plus an excellent way to get even more in tune with the character. She kind of took over and wrote the site herself.

On Sunday, I chaired a session called Wild About Poetry, and we had Liz Honey, Meredith Costain and Moira Robinson on the panel. Lots of issues raised and discussed, and the outcome is a proposal for an Australian Children's Laureate. Now wouldn't that be wonderful! All we need is some money. And lots of people to get behind the idea. In the final session I sat behind two women who are part of the conference committee for the 2010 Brisbane event, so I hinted in a big way that another poetry session would be very popular.
More reports soon.
Posted by Sherryl at Monday, May 05, 2008

Terrific photos! Loved the one of you at the book launch. A big day all around! Congratulations!

I attended the poetry session - very stimulating, rewarding and well-chaired. Glad you enjoyed Bernard Beckett - perhaps the 2010 committee can be persuaded to have him as a speaker, as he is always worth listening to.

Thanks for your comments on the poetry session - glad you got a lot out of it. I think we could have kept going for another hour at least!
Maybe we can ask the Brisbane committee to put Bernard on their list via a little email campaign? Otherwise I'll have to go to New Zealand to hear him speak.