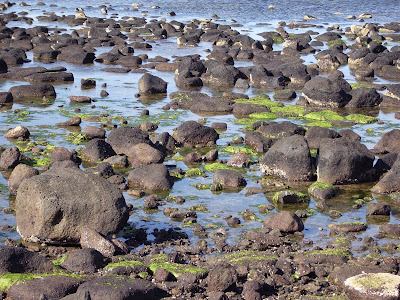 Low tide, when all the rocks are showing. You can make that as deep and meaningful as you want! Or metaphorical. Often when we walk along this beach, several of the rocks have shags perched on them. As a kid, I used to think when Dad said 'like a shag on a rock' that he was talking about some mystical creature. And that the creature was alone and lonely. But down here, there's always more than one, with pelicans and black swans nearby.

2007 has ended, but I have to mention that one of my favourite books was The Absolutely True Diary of a Part-time Indian by Sherman Alexie. I discovered his short stories through some collections I have, plus another anthology that Meg Files recommended which has three stories from each writer in it. (Wish this was available and affordable in Australia for our students.) I've been reading another collection of stories by Alexie that I had to put down as they were a bit depressing - but that's more likely to be my reading mood at the time - I will go back to them. This book, which has won major awards, is fabulous. If you want a great example of YA voice, one that is real and startling and true, this is it. It was a brilliant reminder of what a writer can do in terms of original voice, story and theme by writing what they are passionate about. Is this novel autobiographical in any way? Does it matter? That's always a semi-interesting question but not very relevant to me.

I'm still looking for quotes that will entertain and inspire me in 2008. So far I like this from A Writer's Paris - The real voyage of discovery consists not in seeking new landscapes, but in having new eyes. (Marcel Proust)
And from the author himself, Eric Maisel: It is never someone else's fault that we aren't writing.

Do I have goals yet for 2008? No. Don't rush me! They're hovering around the back of my brain like beautiful butterflies, waiting to land. If I make a grab for them, I'll be left with dust and broken wings. Yes, metaphorical to the end...
Posted by Sherryl at Tuesday, January 01, 2008

That's as profound as I'm getting this year.

Glad you posted a photo, Sherryl! Love it!

I have the Proust quote with a photo framed in my office. So true! It applies to all of life, including the writing. I hope 2008 is a year that all of us see writing and ourselves and our goals with new eyes.

Quite a few people have said they don't do NY resolutions because they never keep them.
In some of the stuff I've been reading, it says that out of 100 people, only 5 set goals, and only 1 of those 5 follows through. You can either take that as confirmation that goal setting is a waste of time, or be that one person and make lots of great things happen!
Now I think about it, it's worth a post!