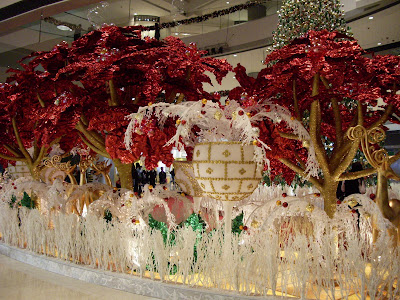 Like many cities in the world, Hong Kong has its Christmas decorations up, and some of them are truly amazing. This is a centrepiece in a large building in Central, (the photo only shows one part of it) with twirling chandeliers and a massive tree covered in coloured balls and these things all around it. I think they are meant to be poinsettias. In front of the big shopping mall in Causeway Bay, the decorations are purple and silver, with angels and glass domes. 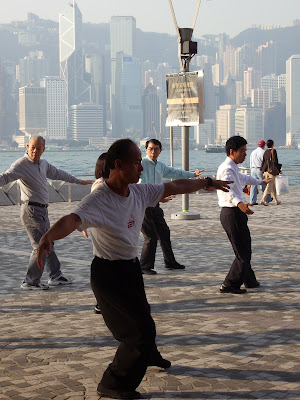 On Friday morning, Sue and I went on a Chinese cultural tour, which began with a one hour tai chi lesson on the harbour front. This is the "experts" group giving us a demonstration - note the backdrop that was our view as we scooped and swayed and stepped. The tai chi master leading the session had a Madonna mike on his head and kept us all moving (not necessarily in time, mind you) - it was fun and invigorating. And amazing to be doing it while looking across at all those skyscrapers. City views here are terrific, even better at night with the light shows. A lot of the buildings have neon Christmas pictures and images on their fronts. We also learned about feng shui, and drank lots of tea in a tea house (I have now got a nice store of lovely teas to take home, including lychee and rosebud tea). 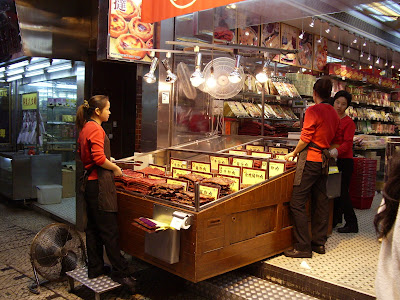 On Thursday we ventured across the water to Macau. A one-hour ferry trip and you're in another country. Well, still part of China really, but we still had to do the immigration thing at each end. Nothing more painful than standing in a queue in front of a group of businessmen off for an "anything goes" weekend, and having to listen to the pontificating.
We arrived too late to see much, unfortunately, and only managed to look around the cathedral ruins just before they shut the gates. The streets were still fairly lively, but apart from the casinos, Macau seems to close down much earlier than Hong Kong. This photo is one of many shops selling the local nougat and shortbready cakes - this woman is actually selling slabs of meat (like jerky?) but we weren't tempted by that. The nougat was another matter.
We ended up at Fernando's, a famous restaurant on the southern island, and I ate drunken steak (drowned, I think, in red wine and a ton of garlic) and Sue ate Portuguese grilled sardines. Macau still has quite a Portuguese influence, especially in the old buildings and food in many of the restaurants. It'd be good to go back in daylight and see all the historical stuff that we missed out on.
The ferry back was "interesting" - whatever ticket you booked, you could go back earlier if there was room, so each ferry sailing had a standby queue. If you missed out you had to run for the next standby queue (and I mean RUN). We used a bit of strategy and went three ferries ahead to get a place! Long day all the same.
Our classes have all finished - I have a day at a school on Monday. Everyone has been great - lots of enthusiastic students, very different from having a class for a whole year. I have done hardly any writing since I've been here (NaNo is pretty much a wipeout for me - I'm trying not to let the failure depress me too much) but I am gathering such good material for poems and stories again that I figure I am still being a writer!

Fantastic write-up about your trip, Sherryl! So many new experiences! Thanks for sharing them--along with the photos--for those of us who are arm chair travelers.