A Day in Shenzhen 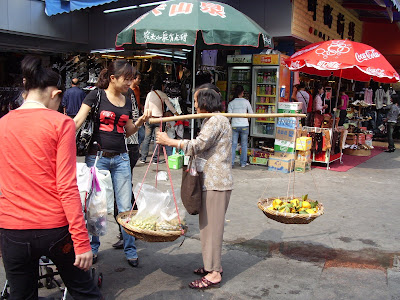 On Sunday we ventured into China, and went a little further this time, past the Lo Wu shopping centre and on to Dong Men. This is an older area but only by about ten years, I think. It was a very busy shopping centre/streets but here the shops were much better in terms of brands and quality (much of Lo Wu is copies). One huge store sold nothing but shoes and boots. We also found a Starbucks, a McDonalds and a KFC. I have noticed that in the 12 months since we were last in Hong Kong, coffee chains like Pacific Coffee and Starbucks have sprouted everywhere. (Starbucks in Australia note - wireless internet here is FREE.) 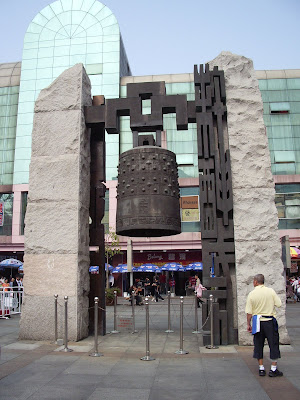 I have no idea what this huge bell is all about - something historical, I imagine. The streets were full of people, mostly strolling and looking in shops. Hardly any signs with English so even in the railway station we had to ask for help. Lots of interesting people to watch and listen to. Sue took a photo of a noodle shop that had about thirty people outside, all eating bowls of noodles with their chopsticks.
Lo Wu was less overwhelming this time because we knew what to expect. Hundreds of shops but mostly selling the same things. I was looking for a new wallet but there were only about 6 different kinds (all copies) and when none of them were what I wanted, that was it. No point looking further. I did buy a Tshirt and jewellery, but that was it. Very restrained!

I love hearing about your trip! So much grist for the writing mill...who knows where some of these experiences will show up in your writing? Hint, hint: have someone take a photo with YOU in it!