Hot Chili on a Cold Night 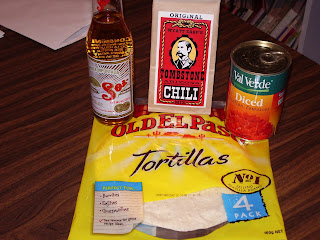 It seems everyone has their own special recipe for Chili (if they eat it). Mine has onions and kidney beans in it, and plenty of hot chili. But while in Tombstone, I spotted a Tombstone Chili Mix. Having just visited Boot Hill Cemetery, I was a bit reluctant, but Meg assured me she had tried it and could vouch for its tastiness. So I brought some home, and even declared it to Customs and Quarantine. It passed.
It's been very cold here in Melbourne this week. Frost and ice. I keep waiting for it to snow. So it was a good time to break out the chili mix. The recipe was quite simple but required "1 12oz bottle of cheap Mexican beer". There is no such thing in Melbourne, so I bought a bottle of Sol beer (cheaper than Corona) for $3.29, and prepared to get cooking.
Did it taste good? Yes, it did. Did it feed 6 Gringos, as the packet suggested? No. It fed two hungry gringos with a bit left over.
Did it warm us up without stripping the lining off our stomachs? Yes, very definitely.
So, if you get the chance, try some Tombstone Chili. Wyatt Earp's Original.
My other souvenir from Tombstone, also thanks to Wyatt Earp whose stamp of authority is on it, is a poster that warns "UNATTENDED & UNRULY CHILDREN WILL BE ARRESTED AND SOLD AS SLAVES".
I'm thinking of making copies and posting them around my local supermarket.
Posted by Sherryl at Thursday, June 14, 2007

Hi Sherryl,
Yep, it's cold here in Melbourne and my little frozen fingers would rather hide in pockets than type. Chili sounds great but your post was just a tease. How about a recipe? And what are the ingredients in your chili mix, for us non-jet setters?

I'm thinking of making copies and posting them around my local supermarket.

Run off a few more and I'll put them up in the lecture theatre too.

All I can tell you is the Tombstone ingredients list included "chili powder, masa flour, cumin, garlic powder, onion powder, salt and other spices"!
Not very helpful, is it?
Will put up my chili recipe shortly.