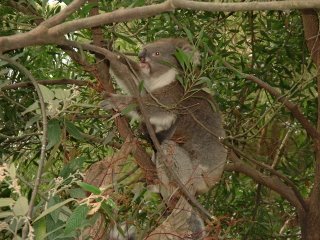 It has been a busy week, finishing training manuals for my Hong Kong sessions and marking final assignments from students (23 picture book texts and 19 short stories, as well as the 75 poems the week before). But I have had a lot of fun taking my exchange writer/teacher, Meg Files, to places around Melbourne. On Saturday I drove her over the Westgate Bridge - a pity that it was so foggy that we couldn't see the bay or the city at all, and then when we were nearly into the city the buildings loomed out of the greyness like ghosts.
Yesterday I took her to Healesville Sanctuary which is out of Melbourne (north-east). A freezing day, since it had started snowing on the mountains, and a little rain but not enough to ruin our fun. The photo above is, of course, a koala, and close inspection reveals its baby underneath its front (somewhere - the baby crawled all over the place while Mum was trying to eat gum leaves).
We saw kangaroos, wallabies, lots of birds, a very speedy Tasmanian Devil that raced around and around its enclosure, dingos, , platypuses, an echidna, and a birds of prey show with falcons and an osprey. And my favourite, a wombat, who was asleep in a hollow. Lots of snakes too but none I was allowed to touch.
I am still reading the memoir - so tired at the moment that two chapters and the eyelids droop.
Wrote a long essay/opinion piece on Saturday about the mid-list author in children's publishing in Australia, but I doubt I will publish it as I think it would make me very unpopular at the moment! Sometimes I think authors are being pushed further and further into the SANH hole as time goes on (that's the Seen And Not Heard hole). Complaints, no matter how justified you feel they might be, are definitely not welcomed.
The reactions to Frank Moorhouse's articles (entitled "What the Hell is Wrong with Australian Writing?", published in the Weekend Australian newspaper recently) have been quite tame. Maybe because after the third part was printed, it became apparent that he wasn't prepared to draw any productive or helpful conclusions, or even make any substantial comments of his own. It was as if he threw in a whole pile of statistics and ideas and observations and said, Here - you work it out.
In the meantime, a children's book publisher at Black Dog Books has started a blog of his own, and has stirred up a few people already. I will follow that one with interest.
Posted by Sherryl at Monday, June 12, 2006

Hate to be a pain, but can I ask how old Meg Files is. She is aver experienced writer and has been teaching for a long time, I am intrigued.