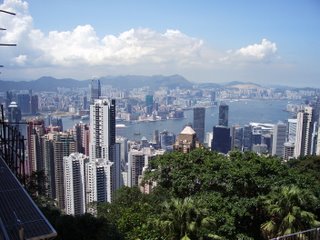 Back from Hong Kong and still taking in all the sights and sounds (in retrospect). Between our sessions, I managed two little trips - one up to Victoria Peak in the tram, and the photo above is the view from the lookout. The tram line is so steep that you are jammed against your seat, and the floor has grooves in it so you can stand at an angle! I was lucky to go on a sunny, reasonably clear day. People kept telling us how great the weather was (after 7 weeks of rain) and how clear the haze was. Usually the smog is worse than LA.
The other trip was to Stanley markets on the other side of Hong Kong Island. These markets were much better than the city ones - less crowded and better quality goods. Also there was a lot of clothing, particularly linen jackets and tops, and tons of children's clothes. The bus ride back to Central was all along the beaches, very beautiful with little bays and blue water, and the ever-present high rises dotted along the shoreline.
While we were in HK, we met a number of the members of Women in Publishing, and attended their AGM. The guest speaker was the woman who is in charge of Penguin China, and afterwards I got to talk to lots of writers (not only editors belong to the group). Sue and I bought several of the member's books: 'Sweat and the City', an anthology of poems and stories (I can relate to the sweat bit); 'The Insider's Guide to Shopping in Hong Kong', a very handy title; and 'Thomas Beckham Wang and other stories' which is a collection of short stories for children. This last book I bought on the basis of reading the beginning of one of the stories - 'The boy who could not finish a' by Sam Jam.
There is very little actual publishing going on in Hong Kong. Most of the big publishers bring their books in from the UK or US. Two small presses I heard about were Chameleon Press (whose owner runs paddyfield.com, an online bookstore) and Six Finger Press, although I know there are several others as apparently they have all decided to form a kind of co-operative. Macmillan Asia has a very small line of fiction - Picador Asia - but that is about it, apart from school and text books. Not so encouraging for HK writers but they can always send their manuscripts overseas, lke we do here in Australia.
Now I am home, it's back to the renovations, which means lots of painting, and two library sessions with kids today at Werribee. I'll get to wear my fabulous pirate glasses I bought in Hollywood Road (where else) in Hong Kong.
Posted by Sherryl at Thursday, June 29, 2006