Me and the MFA

Have you ever had something you dreamed about for years, something that you secretly pined for every time you saw an article about it, or perhaps an advertisement? Usually these are things that are more than just another purchase like a big TV – they’re something that calls to you, that you know will expand your imagination, your world and your ability to create.

For me, it’s been an MFA. A Master of Fine Arts degree.

With this has always come huge obstacles. I live in Australia and MFAs are only offered at universities in the USA. They cost a lot of money, more than a Masters degree in Australia, plus I’d have to pay air fares on top of that.

When I first starting thinking seriously about studying again, I looked at the alternatives. Back then, you had to live in the US for two years while you studied, and I couldn’t see how that would be possible. But no university in Australia seemed to be offering a Masters the way I wanted to study it – as a writer, not as an 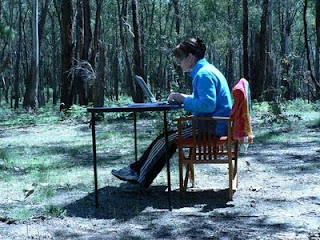 academic who is also writing a novel. And by the time I started getting really serious about this dream, two more things became part of the decision-making.

One was that my writing career had moved very decidedly into writing for children and young adults, and there was very definitely nowhere in Australia where I could pursue this speciality. The other was that many universities in the US had begun to offer low-residency MFAs. Rather than have to live there for two years, I could go for 12 day residencies and do the rest of my study online. More air fares but a lot less in living expenses!

Over the past three years, I’ve felt myself creeping slowly towards the real possibility that I could do an MFA. The final stage was attending the Association of Writing Programs conference in Denver in April 2010. There I was able to talk to faculty at three of the five universities offering a low-residency MFA in writing for children and young adults, and make a decision.

So – in two weeks I am off to Hamline University in Minneapolis-Saint Paul to begin my studies! One of the attractions of Hamline is that I can begin with a one-semester block and if, for some reason (like finances), I can’t continue, that’s OK with them. Another was the friendliness of their faculty member I spoke to, and the great answers she gave me to all my questions.

Some of you who know me will probably be asking – why on earth do I want to study writing when I have been teaching writing for twenty years and have 45 books published? Because I firmly believe that there is always more to learn about writing, and that I still have plenty of room to improve! I’ve felt as though I’ve been on a bit of a writing plateau for the past few years, and I want to get off it.

I’ve found in the past that intensive study always lifts me into new ideas and new ways of writing. The summer school I attended at CSU Fresno in 2002, for example, led me into writing verse novels.

So along the way, as part of this experience, I want to write about and reflect on what I’m learning, and I’m going to post some of those reflections here. I hope you’ll come along for the voyage with me.

Your energy levels scare me. I'm planning to live vicariously!

This is so brilliant and inspiring. Can't wait to hear all about it via your blog. Congratulations. What a fabulous dream and amazing opportunity.

I'll keep you posted. In the meantime, I need to keep working on my first 40 books (out of 120 books on my required reading list) that I have to read and comment on!

That sounds utterly fantastic! I hope you have a great time living your dream. :)

I'm beginning to think my first step is personally getting rid of that ash cloud so my flight won't be cancelled! Just let me put on my ash cloud crunching boots...

Congratulations Sherryl, enjoy! I hope that the studies are inspiring and I am sure your flight will conquer the ash cloud!

Well done, Sherryl. You are an inspiration to your students!

Good to hear from you, Sharon. How is your writing going?

Sherryl I couldn't find an e-mail address or a place to send you a private message but I was hoping you could answer a question for me. I noticed in an earlier post (10 research tips for writers) you mentioned interviewing people as a good way to get information.

I've been scouring the internet (thus how I found your blog) and can't quite find an answer to my question.

When you decide to interview someone for more information how do you pick the person you're going to interview and then once you do how do you approach them and ask for an interview? My short story WiP involves a mythological creature and I'm getting conflicting information on the web and in books.

I did find a professor of Scandinavian mythology who I think might be able to clear up the questions I have but I'm not sure how to go about asking him for his time....any advice would be fantastic.

Hi Raina, Funnily enough most people (especially experts in certain areas) are usually really happy to help out! All you need to do is approach them.
I do a lot of research about them and their speciality first so I'm not going to be wasting their time. I also research my topic as much as I can, and it sounds like you have already done that.
If you can get this professor's email address (if he's at a university it should be listed under faculty contacts), then you can contact him that way.
Explain who you are and why you need the information, briefly, but I would also say that you have done research and got conflicting information, and you hoped that, as an expert in this area, he could give you the correct information. Say how grateful you would be, and how much it would help you to get it right.
Mostly people get annoyed about being asked when you haven't done your homework and ask dumb questions, but you do know what you need and why, so you should be fine.
And if you can find a nice way to thank him if he comes through for you, that's even better! I have acknowledged all the people who helped with "Pirate X" in the back of the book, but I'm also going to put a long list on my website, including the guy who led the pirate tour in Charleston and gave me some great new information.

Thank you! I really appreciate the help. I'll just e-mail him with a straightforward request and the explanation that I've checked numerous sites which seem to give conflicting info and the worst he can do is tell me no right? lol

I really just don't want to offend or bother anyone but you really reassured me that it doesn't sound like that's a common things that happens.