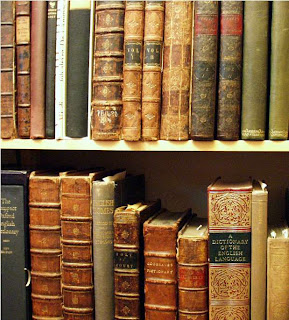 One of the things I've been researching this week (among many others!) is books that were published in the 1890s, and specifically ones that could have been in a person's own library (this person was a school teacher). I found some great sites that sell antiquarian books online, and was even tempted to buy a few. Although there are some excellent booksellers in Melbourne so I think I could find some gems here if I wanted to.

Some of the books published back then are ones we still read today - Mark Twain, Robert Louis Stevenson, Oscar Wilde. Some sound so pedantic and boring that I can't imagine anyone reading them, even in 1900, e.g. The History of the Town and County of Poole; compiled from Hutchin's History of the County of Dorset....to which is added a Supplement, containing Several Curious and Interesting Particulars; with Many Additions and Corrections by the Editor.

There also wasn't much around for children. In Australia there was Coles Funny Picture Book (which had a few pictures but was mostly poems, some of which are 'badder' than Andy Griffith's current efforts). How about Songs for the Little Ones in Twilight Hours by Mrs Arthur Goodeve? Or The Black Cats and the Tinker's Wife by Margaret Baker, with illustrations in silhouette? And this is probably not for children, but I like the sound of A Prisoner of the Reds: The Story of a British Officer Captured in Siberia by Francis McCullagh.

All of these books were published in cloth-covered hardback, usually with embossed covers and spines, some with gold edging on the pages. I imagine that when new, they'd make a fine shelf of black, green, red and blue, with touches of gilt. In the picture above, they're showing their age now. But it took back to me the bookcase we used to have in the hallway in our old house. Most of the books had belonged to my grandfather, and I think he'd brought them with him from Scotland. I do remember the collection included The Rise and Fall of the Roman Empire, and some farming books.

What I also remember is a two-volume encyclopedia, published in 1898, which I used for school work. How was this possible? (Because I'm not 108.) Well, it was only really useful for things invented and in use before 1898. If we studied anything on steam engines or the Crimean War, it was perfect! But if I needed something on Mahatma Ghandi or aeroplanes, well... I had to look elsewhere. It had no photographs, only line drawings, and both volumes were huge and heavy. Yes, I'd love to still have it, and I have no idea what happened to it. I can't even remember the title or publisher. But I still remember trying to heave it off the shelf without dropping it on my foot.

If nothing else, in this age of ebooks and POD and my own groaning bookshelves, it was a reminder of times when books were not a common thing to buy or have in the home, and certainly not for poor people. Paperback publishing tranformed the availability of books to anyone and everyone, as did the Little Golden Books for kids. As I try to keep up with the latest on ebooks and iPads and Nooks, I keep feeling this hankering to go and buy something with a bit of gilt edging!

Interesting site with interesting discussion about books and in particular pre-1920 childrens, which is what i collect. I am selling some on ebay to raise some money. These books are fascinating with artists such as Arthur Rackham, my favourite. If you need help finding any books email on-cargill.ian@gmail.com. I did also write some poetry when i was younger and it did cross my mind to print a small book. You may have some tips.
Regards Ian Cargill